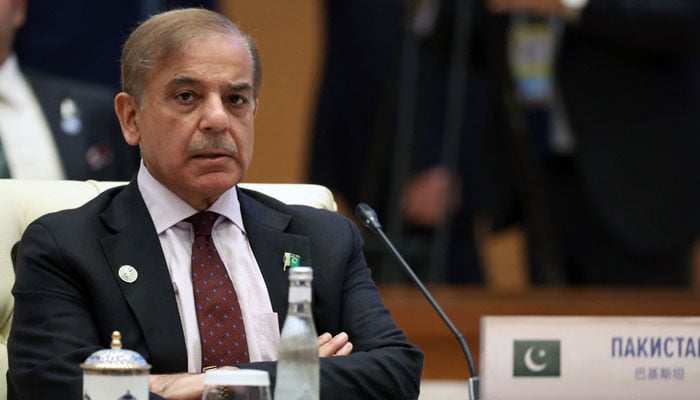 Prime Minister Shehbaz Sharif has said that both Islamabad and Beijing are tied together by a common vision for developing a brighter future for the people of both countries as well as for peace and stability of the broader region.

“This is a responsibility that history has placed on our shoulders and we would surely fulfill it,” said PM Shehbaz in an op-ed published by Chinese publication Global Times, ahead of his maiden visit to China starting tomorrow (Tuesday).

Shehbaz Sharif is among the first foreign leaders to visit China after the 20th National Congress of the Communist Party of China (CPC) backed Xi Jinping as its general secretary for the third time.

Recalling a tribute paid by Chinese philosopher Confucious to his family and friends, Shehbaz quoted him as saying: “There are three types of good friends: one that is direct and honest; one that is trustworthy, dependable, and generous when you need help; and one that is knowledgeable and talented to guide you and show you what you can’t see.”

There is no relationship like ours which so deeply touches the soul of our people and evokes such strong emotions, he said, adding that poetic expressions with emotive diction are used to captivate the essence of these fabulous ties.

“Touching stories of mutual support and solidarity in difficult times, transferred from generation to generation, have become an ineffaceable element of our collective consciousness”.

Nurtured by the enthusiasm of our people and steered by the vision of the leadership, the seed of the Pakistan-China friendship has blossomed into an evergreen tree with deep roots and strong branches, he wrote, explaining that the friendship has withstood the “vicissitudes of international upheavals and vagaries of domestic changes”.

Relations with China form the cornerstone of our foreign policy, he said.

The premier highlighted that the international landscape has undergone a profound transformation “unprecedented in its scale and scope” since his last visit to China.

“Geopolitical tensions are leading to conflicts, the resurrection of the ideological divide, economic and technological decoupling, and the costly arms race. Sadly, this is happening when a multitude of humanity continues to suffer from poverty, disease and hunger,” he wrote.

“In many parts of the world, people are still battling with COVID-19 and its aftershocks. The spectre of climate change is looming large and is a grim reality of today. Pakistan has been its recent victim in the shape of devastating floods,” he highlighted.

The premier said that the imperatives of the 21st century demand a new paradigm to deal with emerging challenges as well as opportunities and to wean our region away from conflict and conflagration.

“We seek friendly relations with our neighbouring countries on the basis of mutual respect and a spirit of cooperation and desire a peaceful resolution of all outstanding disputes including the Kashmir issue through dialogue and diplomacy based on the UN charter and resolutions,” he wrote.

The premier highlighted that in the background of this unfolding global scenario, the “salience of the China-Pakistan strategic partnership has increased manifold”.

He referred to China as a “natural partner”, reiterating Pakistan’s eagerness to further deepen bilateral ties between the two countries, “continuing mutual support on core issues, continuing efforts for regional peace and connectivity and progressively advancing all-weather strategic partnership of cooperation to a new pinnacle of trust and close cooperation”.

The solidarity and support China extended to Pakistan in the aftermath of COVID-19 pandemic was the vivid manifestation of our time-tested friendship, he said, giving an example.

He then shared the example of China’s assistance after the recent devastating floods in Pakistan.

The premier said he was particularly touched to note that even children watching visuals of floods in Pakistan donated their pocket money. “These moving stories truly reflect the deep affection and close fraternal bonds between our two peoples,” he wrote.