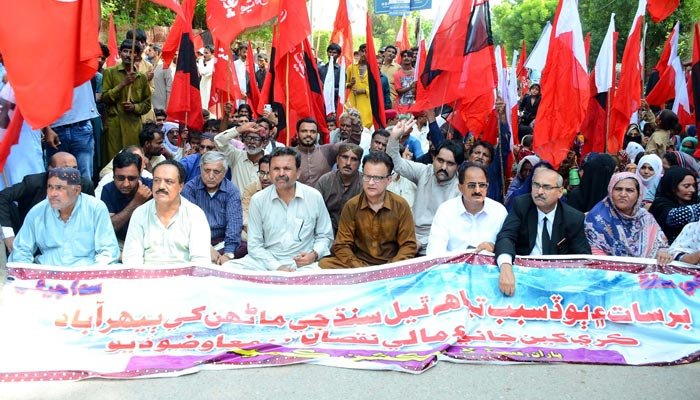 HYDERABAD: Nationalist leaders lambasted the Sindh government on Tuesday for poor treatment being meted out to the province’s flood affectees.

“The rulers are waiting for the province to drown, so they could hold all the incoming funds which are actually meant for victims of the catastrophe,” Qaumi Awami Tehreek chief Ayaz Latif Palijo said, addressing a press conference in Hyderabad Press Club.

The presser took place after a rally was held by Sindh Action Committee in order to register their protest against the Sindh government for leaving flood-hit affectees in distress.

Palijo said people have been “lying on the streets” due to the flooding.

The committee demanded that victims of the recent rain-induced flooding should be provided accommodation in Karachi through a tent city.

“People of Sindh are a marketing strategy for the rulers,” Palijo remarked.

Speaking on the occasion, Dr Qadar Magsi said that the rulers are busy doing visits and photo sessions. Meanwhile, Zain Shah complained about the floods destroying agriculture, homes, and infrastructure.

“Flood affectees are not getting any help whatsoever,” Niaz Kalani remarked.

Tens of millions of people have been affected by relentless monsoon rains that have submerged a third of the country and claimed more than 1,100 lives.

The rains that began in June have unleashed the worst flooding in more than a decade, washing away swathes of vital crops and damaging or destroying more than a million homes.

Authorities and charities are struggling to accelerate aid delivery to more than 33 million people affected, a challenging task in areas cut off because roads and bridges have been washed away.