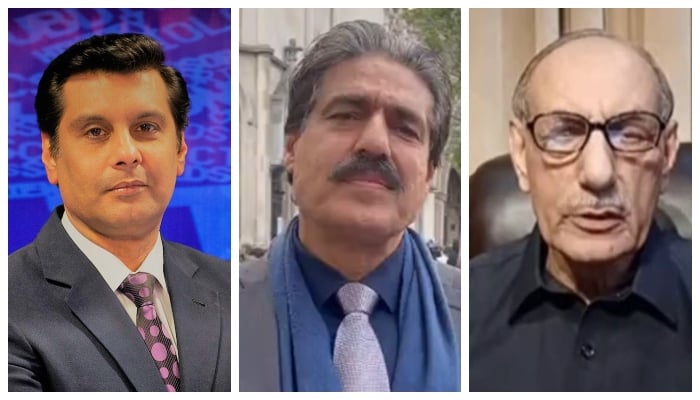 LONDON: PMLN-UK leader Nasir Butt, the central character in Judge Arshad Malik’s video scandal, has sent a Rs750 million defamation notice to Lieutenant General (Retired) Amjad Shoaib for accusing him of being involved in the killing of journalist Arshad Sharif.

Gen (retd) Shoaib declared Butt a “murderer of slain journalist Arshad Sharif” in a video published on his social media channel. The well-known journalist was assassinated in Kenya a few days back by the local police.

General Shoaib alleged: “This information has come through that Nasir Butt, who is an absconder and who is seen with Nawaz Sharif, arranged the murder of Arshad Sharif. It has been said that he did so on the instructions of Maryam Nawaz. These are pieces of information.”

Holding a press conference in London, Butt said he was shocked to see Gen Amjad Shoaib making false allegations against him. He called General (retd) Shoaib a “corrupt and dishonest man who had made billions through corruption and was known for lying and spreading fake news”.

Nasir Mehmood said that Shoaib’s defamatory clip, available on YouTube as well as on social media platforms, has damaged his reputation as well as his family in the eyes of the public at large, and claimed Rs750 million against damages by Sohaib. The amount was claimed against the mental torture and agony injury, loss of reputation, special damages and legal assistance, and general charges.

The legal notice served to Shoaib said that he has to pay the amount within 15 days, failing which Nasir Mehmood would initiate civil as well as criminal proceedings in the competent court of law.

Butt said at the press conference that Shoaib made baseless allegations and failed to substantiate his flimsy and baseless allegation. He said the local police admitted its role and there are questions about who asked Arshad Sharif to leave Pakistan and sent him to Kenya but “Amjad Shoaib accused me of murder to deflect attention”.

The letter to Gen Shoaib accuse him of making false allegations against Butt and Maryam Nawaz for “some hidden agenda and for the satisfaction of your ulterior motives, the accomplishment of your nefarious designs” linking them with the “unfortunate and fateful incident which took the precious life of Arshad Sharif”.

Butt’s lawyer has asked Gen (retd) Shoaib to apologise and pay damages or face court action all the way. The letter continues: “No allegation pertaining to the murder/killing of Arshad Sharif was ever levelled by his legal heirs against my client but you by your personal vendetta and some unknown grudge involved my client in the said unfortunate incident and attempted to divert the attention from real facts and actual culprits.”