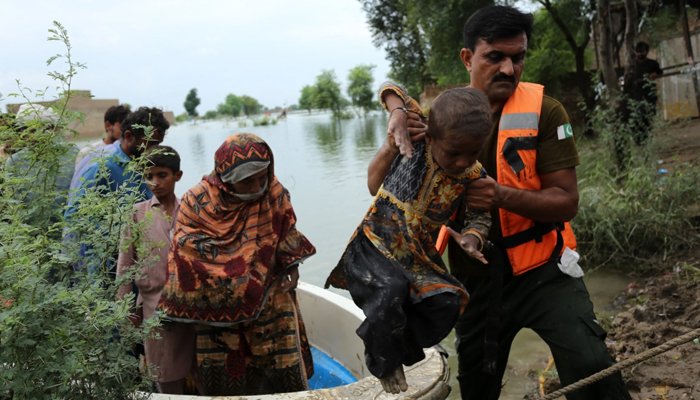 There is a grave risk of flooding in Mianwali where authorities are looking to safely evacuate residents.

The water level in the Indus River near Rajanpur is on the rise and there is a risk the already inundated town may suffer another flood.

Moreover, due to a flood in Chenab River, the undeveloped areas of Liaquatpur have been submerged.

Over in KP’s Charsadda, more flood water has entered hundreds of houses.

The Jinnah Barrage built on Indus River will likely witness a heavy water flow of 700,000 cusecs which may affect 47 areas.

Incharge Zameer Kazim at the Jinnah Barrage in Kalabagh said early morning that the flow of water into the barrage currently stands at 427,000 cusecs, while the outflow has been recorded at 424,000 cusecs.

The Flood Forecasting Division informed the National Disaster Management Authority (NDMA) yesterday that “very high” and “above level” flooding is likely to continue in Kabul River at Nowshera during the next 24 hours.

It also said that Indus River at Kalabagh and Chashma is likely to attain “high” to “very high” flood level during the next 24 to 48 hours.

All district and city administrations were asked to timely evacuate the at-risk population from the flood-prone areas.

Tens of thousands of people fled their homes on Saturday after a fast-rising river destroyed a major bridge.

Powerful flash floods in Khyber Pakhtunkhwa caused the Kabul River to swell, sweeping away a large bridge overnight, cutting off some districts from road access.

Downstream, fears of flooding around the river banks prompted around 180,000 people in the district of Charsadda to flee their homes, according to disaster officials, with some spending the night on highways with their livestock.

The military has joined the national and provincial authorities in responding to the floods and army chief Gen Qamar Javed Bajwa on Saturday visited Balochistan, which has been hit heavily by the rains.

“The people of Pakistan are our priority and we won’t spare any effort to assist them in this difficult time,” he said.

Pakistani leaders have appealed to the international community for help and plan to launch an international appeal fund. The foreign affairs ministry said Turkey had sent a team to help with rescue efforts.

“The magnitude of the calamity is bigger than estimated,” said Prime Minister Shehbaz Sharif, in a tweet, after visiting flooded areas.

Another 119 people died and 71 were injured due to rain and flood in the last 24 hours, according to the National Disaster Management Authority.

The authority said that the death toll has reached 1,033, with 1,527 people injured.