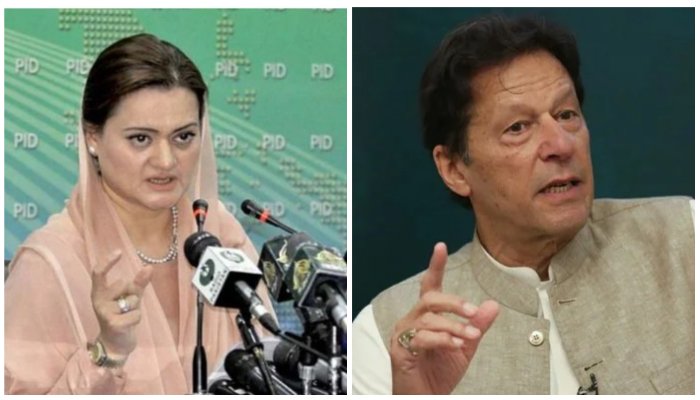 ISLAMABAD: Minister for Information and Broadcasting Marriyum Aurangzeb on Sunday heavily censured PTI Chairman Imran Khan and called him out for “being a misogynist.”

Taking to Twitter, the information minister, with regard to the indifferent attitude of PTI leaders, workers, and followers and their inability to distinguish right from wrong, also quoted the 18th verse of Surah Baqarah from the Holy Quran, which translates to: “Deaf, dumb and blind — so they will not return [to the right path]”.

She added that PTI Vice President Maryam Nawaz was right about Imran Khan when she called him a misogynist. Her tweet came in response to a highly derogatory doctored image depicting Maryam and Khan, that PTI leader and former human rights minister Shireen Mazari tweeted.

“It’s unfortunate that we have to even mention this sorry excuse for a human being who continues to stoop to new lows of misogyny,” she said.

“Imran Khan has proven, time and again, that he is a misogynist who has no respect for women & that he considers them to be nothing more than objects to be abused & harassed,” she wrote.

“He has encouraged & inculcated this behaviour and mindset both in his party members and his followers,” the information minister continued.

“It is especially disappointing and sad to see female party members and followers of PTI not only condoning such behaviour but partaking in it and celebrating it too. This is extremely shameful and is a true reflection of how small a man IK really is.”

This isn’t the first time that the PTI chairman and his supporters have come under fire for propagating misogynist remarks.

Back in May, journalists, activists, and politicians had condemned Khan’s derogatory remarks against Maryam when he — referring to Maryam’s Sargodha rally on May 19 in which she continually berated him — said: “Someone had sent me the speech delivered by Maryam Nawaz in Sargodha yesterday. In that speech, she uttered my name with such passion that I would like to tell her: Maryam, please be careful, your husband may get upset because you were constantly repeating my name.”

It should also be noted that Aurangzeb was recently harassed by PTI supporters in London when she went to have coffee in a cafe during her free time.