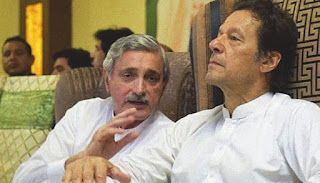 Soon after news of the reshuffle in the federal cabinet broke on news channels, PTI leader and PM Imran’s close aide Shahbaz Gill claimed that Jahangir Khan Tareen has been “removed” as chairman of the task force on agriculture.

“Mr Jahangir Khan Tareen has been removed as Chair of Task Force on Agriculture in light of findings of Sugar and Wheat Inquiry Report,” Gill confirmed on his official Twitter handle.

He also hinted that further action would be taken against those found guilty for the wheat and sugar crisis.

However, Tareen rejected the reports of his removal, saying he was never the chairman of any task force.

“Hello hello, News being reported that I have been “removed” as C’man Agri Task Force ….I was never chairman of any task force. Can anyone show me a notification with me as C’man ?? Pl get your facts right people,” he said in a tweet from his official handle.

“The sugar inquiry commission has been actively engaging with about 10 mills, including 3 of mine. We are sharing all records asked for. We have given free access even to our server. Nothing has been seized as we are fulfilling all requests, we have nothing to hide,” he also said in a follow-up tweet.