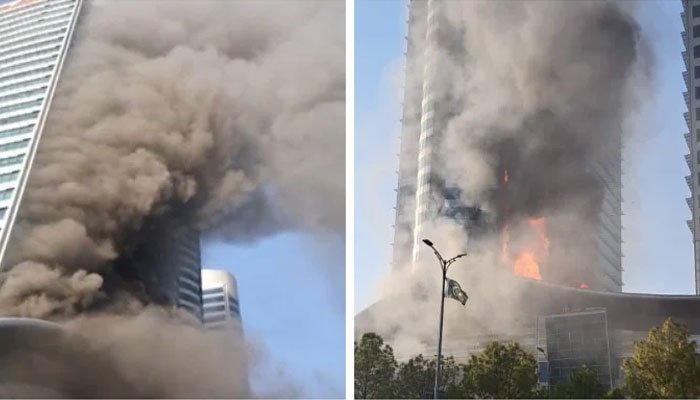 Azad Jammu and Kashmir (AJK) Prime Minister’s special assistant on Monday said that they fear the inferno in the popular Islamabad shopping mall, which is owned by AJK PM Sardar Tanveer Ilyas, is a case of “political victimisation”.

A fire broke out in the food court of a popular shopping mall in Islamabad Sunday, but was quickly brought “under control” out as authorities scrambled to rescue.

The building, under the orders of the deputy commissioner, was sealed after the completion of rescue operation, Islamabad police said.

“It is feared that [federal government] is doing political victimisation in the light of the political situation,” the AJK PM’s aide said while referring to the conflict between the centre and PTI, which has government in the regional area.

He claimed that the federal government “wants to make it a bigger incident than Model Town fire”, accusing PM Shehbaz Sharif and Interior Minister Rana Sanaullah of involvement in the mall fire.

Meanwhile, AJK Food Minister Ali Shan warned that they will stage a sit-in if the mall is not reopened.

“We don’t want to politicise the matter nor are we doing that,” the minister said that they have come to express solidarity with the AJK premier.

The administration officials also alleged that the district administration showed derogatory behaviour when they drew attention over the delay in extinguishing the fire.

Speaking to Geo News, mall’s general manager Amir Khawaja said that fire broke out in the kitchen of the food court and it caused no casualties.

Only a shop was damaged, he added.

Khawaja said that they will investigate the matter and bring it before the media. He further stated that overseas Pakistanis have invested their money in this mall.

“We don’t want to drag politics in this matter as this is a source of people’s livelihoods,” Khawaja said.

He complained that the district administration is evicting the habitants of the plaza’s residential area, who also include patients.

A case over the fire incident was registered at Margalla Police Station on behalf of SHO Mateen Chaudhry under the Section 436.

The FIR stated that the unidentified men set the shopping mall ablaze under unknown motives.

Tower A was engulfed in flames and the rescue teams were busy in dousing the blaze, it stated.

Islamabad District Magistrate’s Office issued a notification announcing the formation of a seven-member fact-finding committee to ascertain the cause of the fire, later on Sunday.

The committee has been tasked to find out potential threats/factors that lead to the fire’s spread and determine whether fire safety equipment and the fire safety alarm system inside the building were operational.

It will also review whether any mock exercise was conducted in the recent past by the management and also make sure the extent of the damage.

The committee has been provided three days to complete the tasks.

Islamabad’s additional district magistrate will lead the committee, while it will have Sector I’s assistant commissioner, Rawalpindi’s district emergency officer, three officials from the CDA, and any other coopted official as members.