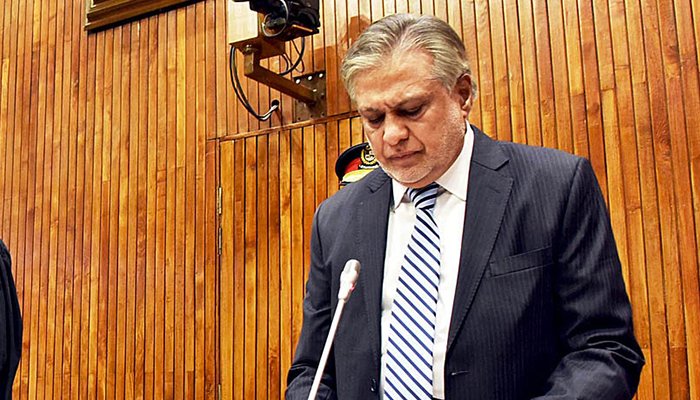 PML-N Senator Ishaq Dar will take oath as a federal minister today (Wednesday) at 10am after he was sworn in as senator following his return to Pakistan from London — where he lived for five years in self-imposed exile.

President Arif Alvi will administer the oath to Dar at Aiwan-e-Sadar.

Dar, who had been successfully elected to the Senate from Punjab, remained out of the country since October 2017 until an accountability court suspended his arrest warrant last week.

Dar is all set to get the finance ministry portfolio in line with the decision made during a London meeting of PML-N supremo Nawaz Sharif and Prime Minister Shehbaz Sharif.

PML-N leader Miftah Ismail Tuesday officially stepped down as the finance minister of the country by handing over his resignation letter to PM Shehbaz.

“I have returned to my country by the grace of God. I will try my best to pull Pakistan out of the [economic] maelstrom it is surrounded with,” Dar had said after touching down in Pakistan.

“[We] pulled Pakistan out of an economic maelstrom back in 1998 and 2013,” the incoming finance minister said.

Dar has returned to “facilitate” the government in its efforts to resurrect the cash-strapped economy by taking over the key portfolio of the finance ministry.

Separately, in a question-and-answer break during the Senate session, blaming the hundi and hawala businesses, Dar said that the rupee’s value has been kept low artificially, adding that such practices cannot hold the local currency hostage.

Dar said that the US dollar depreciated by around Rs10 against the rupee since he landed in the country, stating that one of the problems faced by the country is the artificial depreciation of the rupee.

“Inflation is also high,” he said listing the issues that the coalition government has to fix.

Referring to the winning streak of the rupee in the market, the PML-N leader said that the country’s debt reduced by Rs1,350 billion in less than 24 hours. He also stressed the need for amendments to the previous finance bill.