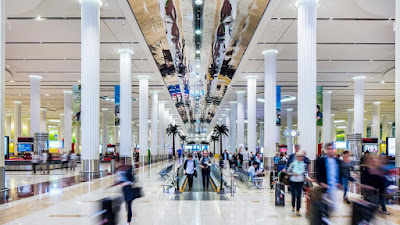 The United Arab Emirates is considering imposing restrictions on work quotas of countries that refuse to accept their nationals who wish to leave the Gulf nation amid the coronavirus outbreak. The Ministry of Human Resources & Emiratisation is weighing plans to suspend its memorandum of understanding with certain countries, state-run WAM reported, citing an unidentified government official.
The move comes after a number of nations didn’t respond to requests from their citizens for repatriation, according the official. The U.A.E. is home to more than 9 million people, mostly expatriates. The nation, which has reported 3,736 virus cases including 20 deaths, has shut malls, restaurants and halted the majority of its flights.
The U.A.E. has offered to fly home stranded Indians and citizens of other countries who wish to be repatriated if they test negative for COVID-19, Dubai-based Gulf News reported on Sunday, citing the U.A.E.’s Ambassador to India Ahmed Abdul Rahman Al Banna. He said the U.A.E.’s Ministry of Foreign Affairs and International Cooperation had sent out a “note verbale” to the embassies of all countries
More than 25,000 Pakistanis who are stranded in the U.A.E. have registered with their diplomatic missions in Dubai and Abu Dhabi to repatriated, the nation’s ambassador to the U.A.E., Ghulam Dastgir, told the Gulf News.
India’s junior foreign minister has said that the government cannot facilitate the return of Indians stranded abroad during the current lockdown and international travel ban in his country.
“We get a lot of emails and requests from people who want to come home, some are unwell, some have bereavements in their families, but since international travel is affected so we cannot do selective evacuation,” the Hindustan Times quoted him as saying separably on Friday.