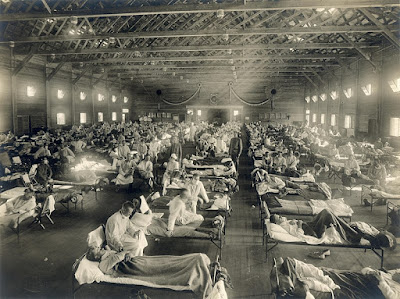 The Spanish flu, also known as the 1918 flu pandemic, was an unusually deadly influenza pandemic. Lasting from January 1918 to December 1920, it infected 500 million people – about a quarter of the world’s population at the time. The death toll is estimated to have been anywhere from 17 million to 50 million, and possibly as high as 100 million, making it one of the deadliest pandemics in human history. 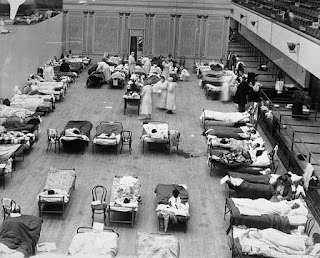 The virus allegedly came from the United States of America with the American forces which landed in the western harbors of France and probably with Indochina’s troops or Chinese workers hired in the French factories. The disease spread in three waves from April 1918 to February 1919. The second wave was the most severe in September, October and November. Half of the dead occurred among the 20-40 old people as the older people were more disease-resistant. Lethal forms were due to respiratory complications which often killed in a few days. 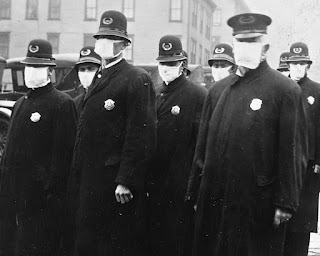 The government did to preventive measures that were unequally applied as the treatment could be only symptomatic. The reactions of people were astonishingly cautions probably because the papers were ordered not to deal with the epidemic as long as the war lasted for.
Some new serological studies and molecular biology techniques led up to clarify the strain of the 1918 influenza virus without further understanding of its special virulence.
Despite its popular name, historical and epidemiological data cannot identify the geographic origin of the Spanish flu.
The origin of the “Spanish flu” name stems from the pandemic’s spread to Spain from France in November 1918. Spain was not involved in the war, having remained neutral, and had not imposed wartime censorship. Newspapers were therefore free to report the epidemic’s effects, such as the grave illness of King Alfonso XIII, and these widely spread stories created a false impression of Spain as especially hard hit.
Nearly a century after the Spanish flu struck in 1918–1920, health organizations moved away from naming epidemics after geographical places. More modern terms for this virus include the “1918 influenza pandemic,” the “1918 flu pandemic,” or variations of those.