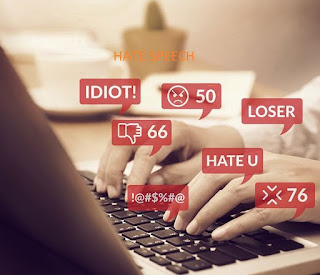 Outrage over two separate posts causes a commotion on Facebook and WhatsApp.
Abu Dhabi: An Indian manager in Abu Dhabi is in trouble for demeaning Islam on social media and hurting the religious sentiments of Muslims.
Mitesh.U, a financial manager at an Abu Dhabi-based firm, could face legal action over his Islamophobic Facebook post which uses graphic images to show how a “jihadi coronavirus suicide spatter” (sic) could “cause 2,000 deaths compared to 20 by a jihadi bomber detonating a belt rigged with explosives”.
The post is a malicious reference to videos falsely claiming to show members of a Muslim missionary group in India spitting on police.
Mitesh’s post has sparked outrage on social media with many demanding his immediate dismissal and arrest.
Shortly after Gulf News brought the post to the attention of his employer, the company’s legal representative said they have launched a probe into the matter. “We are examining the case. Strict legal action pursuant to UAE laws will be taken against the man if our investigation reveals that it was he who put up that post. He will be sacked. We have a zero-tolerance policy,” the company’s legal representative said.
Go to Pakistan.
Last week, a visiting Indian job seeker was told to go to Pakistan by his fellow countryman, who owns an event management company in the UAE.
Alam, 42, from India, told in G.News he had barely shared his CV with Dari on WhatsApp when he messaged back saying ‘Go back to Pakistan’.
“I am aghast. How can someone be so insensitive?” said Alam. “When I confronted him, he abused me and threatened to report me to police,” added Alam who has since lodged a complaint with Dubai Police. The WhatsApp exchange between Alam and Dari has also gone viral on social media.
Phone calls made to Dari by G.News remained unanswered over two days while an email sent to him elicited no response.
Strict laws
The UAE outlaws all religious or racial discrimination under a legislation passed in 2015.
The anti-discrimination/anti-hatred law prohibits all acts “that stoke religious hatred and/or which insult religion through any form of expression, be it speech or the written word, books, pamphlets or via online media.”
The legislation mainly aims to fight “discrimination against individuals or groups based on religion, caste, doctrine, race, color or ethnic origin.”
What is Islamophobia?
Islamophobia is an exaggerated fear, hatred, and hostility toward Islam and Muslims that is perpetuated by negative stereotypes resulting in bias, discrimination, and the marginalization and exclusion of Muslims from social, political, and civic life.