Imran refused to cave in to party pressure, blackmail 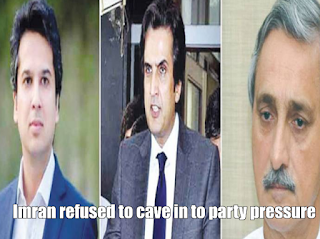 Imran refused to cave in to party pressure, blackmail

ISLAMABAD – Notwithstanding the pressure from within the ruling party and the business community not to dig deeper the sugar scam, PM Imran Khan gave a go-ahead to the chief investigator in the case saying that he would not act as a traditional politician.
The official sources told The Nation on Saturday that PM Khan was under immense pressure from his close ones and also had to face emotional blackmailing but remained steadfast in his assurance to the nation that that minted money through the sugar crisis would be unmasked at every cost.
The government has made public the report of the Inquiry Committee on the increase in sugar prices that had found several leading political figures as major beneficiaries of the “unjustified” sugar export policy of the government.
Official sources in the ruling party said that PM Imran Khan was under huge pressure from the powerful political circles within and outside his party and the business community not investigate sugar scam and then not to make the report of the inquiry committee public. Even the government was threatened by the powerful mafia in the business community that another artificial sugar crisis would be created in the country if the findings of the report were made public, sources added.
However, some close aides to PM within the ruling party also gave some strength to him by insisting that the report should be made public. Hearing to all side, PM Imran Khan said that neither was he a traditional politician nor a traditional PM, and he would release the inquiry report for public consumption without fearing for any eventuality, a party source said while quoting PM. PM Khan said that he would do this work as a mission, the source added.
The official sources informed that the Inquiry Committee headed by Director General Federal Investigation Agency (FA) Wajid Zai and Ahmad Kamala Deputy Director General Intelligence Bureau and Muhammad Goher Nafees DG Anti-Corruption Establishment Punjab as its members received threats from the power sugar mafia not to dig deeper the reasons of skyrocketing prices of sugar in the country during last year.
After the finalization of the report on the sugar crisis, an Inquiry Commission is further carrying out forensic analysis to expand on the findings of the Inquiry Committee.
According to official sources, some arrests are also expected from the sugar industry after the commission would complete its forensic analysis. The commission is due to complete its task on 25th April 2020 after which the findings will be made public and any corrective or punitive measures required or recommended will be taken by the federal government under the leadership of Prime Minister Imran Khan, said an official statement released by government’s Press Information Department.
The government through a cabinet decision had expanded the scope of the Inquiry Committee to an Inquiry Commission by conferring powers given under the Pakistan Commissions of Inquiry Act 2017.