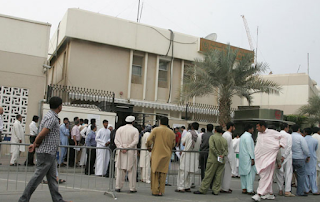 More than 20,000 Pakistanis in the UAE want to go back home

Dubai: More than 20,000 Pakistanis who want to go back home from UAE have registered with the Consul General in Dubai during the last three days.
The Pakistan consulate launched a campaign on April 3 to register Pakistanis who want to go back home following the Emirates airline announcement that the airline would operate some flights to certain destinations to evacuate stranded visitors and the residents who want to go back to their home countries.
Although Emirates did not mention Pakistan in the list of countries that the airline would fly to, the Consulate started registering Pakistanis in the UAE to keep the data ready in case the flight operation to Pakistan opens.
Hundreds gathered outside consulate.
However, the whole message was taken out of context by stranded Pakistanis as hundreds of them thronged the consulate building in Bur Dubai on Sunday demanding the Consul General send them back home on flights. They created quite a scene outside the consulate despite the Consul General explaining to them the whole process being followed. It was also clarified that Emirates has not opened any flight booking for Pakistan yet.
Who are stranded people
Most of the people who gathered outside the consulate included those who came to the UAE on visit/tourist visas but got stranded here after Pakistan and the UAE suspended the flight operations to combat the coronavirus outbreak.
“We are surprised to see hundreds of people gathered outside the consulate today despite the movement restrictions in Dubai,” Ahmed Amjad Ali, Consul General of Pakistan in Dubai, told Gulf News. He said that people were probably misgauded by some Pakistani media channels and social media as they believe that the consulate is arranging evacuation flights for Pakistanis.
“We are only registering people to ensure that priority should be given to deserving people and those who are stranded here,” he said and made it clear that flights will be announced by the airline — be it Emirates or PIA — and that the consulate will only provide them the list of registered people who have to travel on priority.
Huge numbers
He said out of total 20,000 people registered in just four days at the Consulate, around 10,000 are those who came here on visit visas, laid off or going on unpaid leave. Rest of them are those who want to go back home with or without families to spend holidays due to situation arising out of coronavirus measures being taken in the UAE. There are a number of people who came here for medical treatment and want to go back.
A senior official at the Ministry of Interior in Pakistan told Gulf News that stranded Pakistanis in the UAE would have to be patient as no flight operation permission has been given to any airlines so far to fly to Pakistan. “Even our domestic flight operation has been shut down until April 11 and the country is under lock down with no passengers’ transport operating,” he said,
Consul General Ali appealed to the people to strictly follow the instructions being given by the UAE authorities and only believed in the news from reliable news channels.
Food distribution
“We are even providing food to people who are stranded here and also to those who approach us for food due to the situation in the country,” said the Consul General.
He said that the consulate has already distributed ration to more than 3500 deserving people in Dubai and Northern Emirates. He said the ration bags mainly included rice, sugar, flour and other daily use items. He thanked the business community members who are cooperating with the consulate to provide food to the needy people.
Emirates flights
Meanwhile, Emirates has announced on its website that the airline has obtained approvals to fly passengers outbound from the UAE to some destinations from April 6. Initial flights to commence from Dubai to London Heathrow, Frankfurt, Paris, Zurich and Brussels.
Stringent entry restrictions remain in place at these destinations as well as others across the world; travellers advised to check before travel. Safety and well-being of customers and crew remain Emirates’ top priorities
Check with your country advisory.
“If you are considering booking one of these flights, you will need to check eligibility from the respective country government guidance and entry criteria on the IATA information page to ensure you are able to travel. You do not need to contact your Embassy for any further travel permissions/documentation,” says Emirates statement.