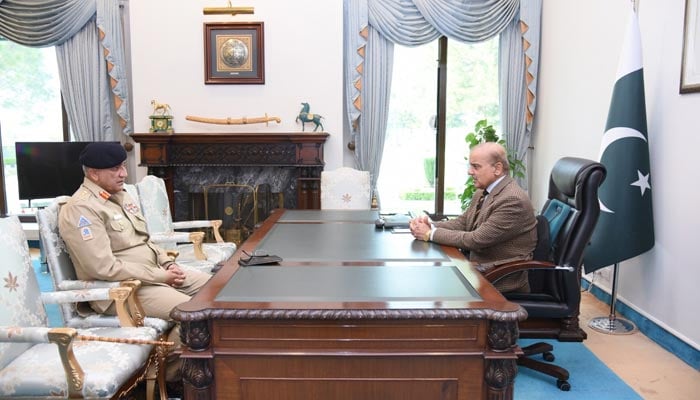 COAS Bajwa is set to retire on November 29 (tomorrow) and will hand over the “baton of command” to Gen Asim Munir, who was appointed to succeed him last week.

As he gets ready to bid farewell to arms after serving as COAS from 2016-2022, Genral Bajwa met PM Shehbaz and President Arif Alvi today.

During the meeting, PM Shehbaz lauded the outgoing chief’s services for the Pakistan Army, national defence, and national interests, a statement from the PM’s Office read.

“The army, under the leadership of Gen Bajwa, has rendered exemplary services during various crises — including the removal of Pakistan from the FATF’s (Financial Action Task Force) grey list, coronavirus pandemic, and floods,” the prime minister said.

The armed forces crushed the menace of terrorism with valour and bravery under Gen Bajwa’s leadership, the premier said as he noted that he took charge as the army chief during “one of history’s most tough moments”.

The prime minister also appreciated the army chief’s services in terms of geo-economics as he noted that all political forces would have to sign on a “charter of the economy” to ensure that Pakistan becomes a strong economic force.

“You got the honour of leading the world’s best army,” the prime minister told COAS Bajwa.

In response, the outgoing chief thanked the prime minister for his full cooperation in the execution of national affairs.

Before meeting the prime minister, the army chief paid a farewell call on President Dr Arif Alvi at the Aiwan-e-Sadar, a statement from the President’s Secretariat said.

In the meeting, the president commended Gen Bajwa’s services in the field of defence and also appreciated his services to the country and the Pakistan Army.

The president expressed best wishes for Gen Bajwa in his future endeavours.