Imran should give explanation for his ‘anti-army’ remarks: President Arif Alvi 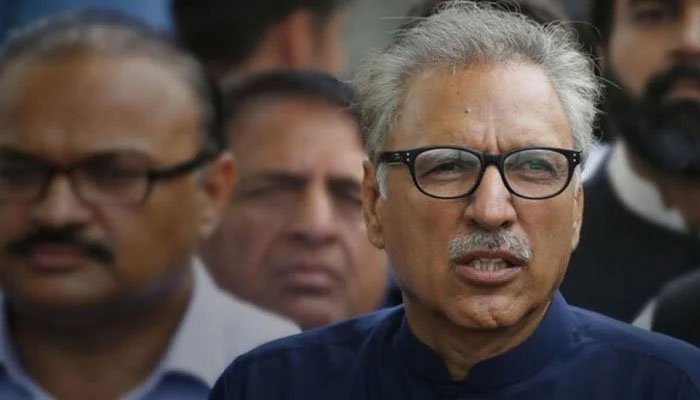 PTI Chairman Imran Khan once again drew severe criticism from the military leadership and politicians alike for his derogatory remarks towards the Pakistan Army made during a public rally in Faisalabad on Monday.

Though the PTI has defended its leader’s statement, President Arif Alvi — who is also a party member — distanced himself from the statement and said that Imran Khan himself should explain what exactly he meant to say about the army.

During a casual conversation with journalists, Alvi said that the army is patriotic and ever ready to sacrifice their lives.

“The army also worked in relief activities for flood victims. The patriotism of the COAS and the entire army cannot be doubted,” Alvi said, adding that all institutions including the incumbent government are patriotic.

He further stated that he is working behind-the-scenes on mediation and trying to clear misunderstandings among all stakeholders.

At a public rally in Faisalabad, the PTI chairman called out the government, saying that it was delaying the elections to appoint an army chief of its own and that if a “patriotic chief of army staff comes in, he will not spare the incumbent rulers.”

The PTI chairman said that PPP Co-chairman Asif Ali Zardari and former premier Nawaz Sharif “feared” a strong and patriotic army chief, who could hold them accountable for the looted money they had stashed abroad.

The former prime minister said a new army chief was going to be appointed in November this year, and they [Zardari and Nawaz] jointly wanted to appoint a favourite [general] as the next army chief.

Both have committed corruption worth billions, and they wanted to appoint an army chief who could protect them and their corruption, Imran Khan alleged.

The PTI chair alleged that PM Shehbaz, his brother Nawaz, and Zardari had been involved in laundering the public money, and the two families had been looting the national exchequer for the last 30 years.