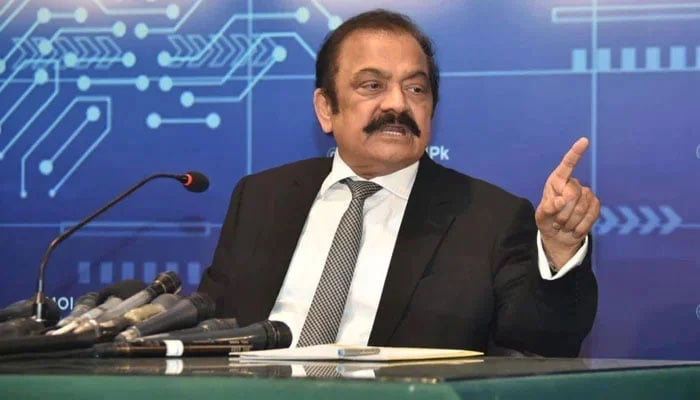 Rana Sanaullah’s statement came after PTI leader Faisal Vawda claimed that journalist Arshad Sharif was shot at from a close range, therefore, his murder was “premeditated.”

Vawda said that irrespective of how a probe into Arshad’s murder is launched, evidence related to his killing — including his mobile phone, laptop, and documents — will “never be found as they have been erased.”

Rana Sana said that after Faisal Vawda’s press conference, no other evidence is needed, it seems Imran Khan is the mastermind of Arshad Sharif’s killing as Faisal Vawda had revealed the family related to the farmhouse in Kenya.

“Waqar Ahmed, Khurrum Ahmed and their family related to the farmhouse visited by Arshad Sharif. The family has a huge business in Dubai and it is associated with media and Faisal Vawda exposed the persons,” he said.

The Interior Minister said that Imran Khan is putting the blame on the establishment and the government but Vawda is giving clean chit to both.

Rana Sana said that Faisal Vawda claimed that he was in contact with Arshad Sharif and his assertions could not be rejected.

“Two experts have been sent to Kenya to ascertain the information about Waqar Ahmed and Khurrum Ahmed,” he said.

Rana Sana said the investigation team had gone to Kenya and it would collect evidence within a few days the team would also visit the farmhouse and approach Waqar Ahmed and Khurram Ahmed.

“The team would confirm as to who is the owner of the farmhouse,” he added.

He said that Imran Khan is cashing in on Arshad Sharif’s murder. Imran Khan was postponing the long march for an opportune time and announced the date of the long march as soon as the body of the slain anchorperson was arriving from Kenya.