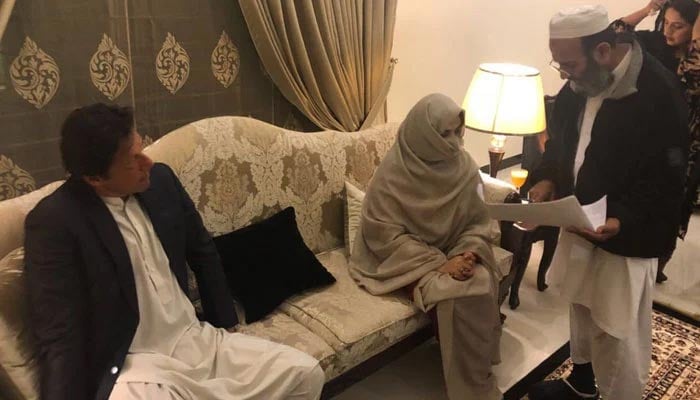 This was revealed by PTI’s core committee member Mufti Saeed Khan during the Geo News programme “Jirga”, who solemnised their Nikah in 2018.

A Nikah is a marriage contract officiated by a cleric in Muslim weddings.

Mufti Saeed revealed that the first Nikah was annulled as it was solemnised during Bushra Bibi’s Iddat (the time a woman goes into isolation after her husband dies or divorces her).

The mufti said that he was unaware of it, however, when he had to solemnise it again as soon as he came to know about the situation. “I declared it null and void and solemnised the Nikah again as per Islamic teachings,” he added.

The former prime minister was married to Bushra — who is his third wife — in February 2018.

The PTI confirmed the news of Khan’s marriage. His friend Zulfi Bukhari and former party leader Awn Chaudhry had said the Nikah was solemnised by Mufti Saeed in Lahore. They both also stood witness to Khan’s Nikah.

The news about the former PM’s third Nikah was first broken by a senior correspondent with The News Umar Cheema, who said that the Nikah first took place on January 1, 2018. However, the party had denied the report at that time.

The PTI later confirmed that Khan proposed marriage to a woman named Bushra.

Cheema had said that Khan married Bushra when she was observing Iddat. In his report, the journalist said that to hide the fact about Bushra’s Iddat, pictures were released on February 18, 2018.

To hide his lie, Cheema had claimed that Khan appealed to Mufti Saeed to not give any statement to the media persons at that time.

He further said that Khan told Mufti Saeed that he has to maintain the PTI chief’s integrity under any condition, to which the latter said that the former PM shouldn’t stop him from giving a statement as he agreed to keep the secret.

Cheema added that Mufti Saeed had expressed reservations with people close to him and said that if he tells the truth, it will lead to an issue and he cannot let anyone know that he blindly trusted Khan and Bushra Bibi regarding the Iddat period.

He also said that he was kept in the dark regarding the matter.

According to Maneka family sources, Bushra’s former in-laws, the divorce took place on November 14, 2017, which was confirmed by Bushra’s friend Farah Jabeen and the Iddat was completed on February 14.