Imran Khan will not tender apology to IHC: PTI leader 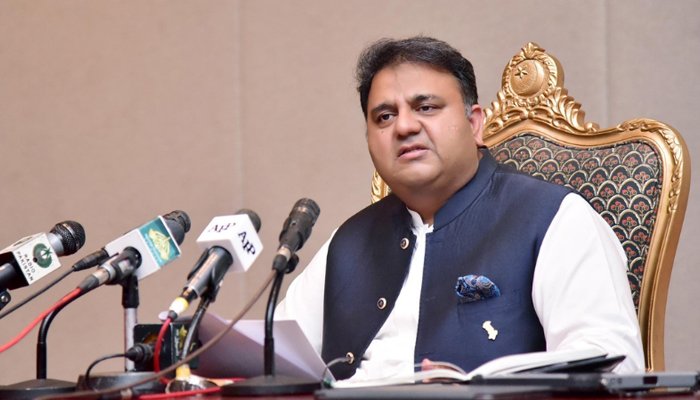 ISLAMABAD: PTI’s senior leader Fawad Chaudhry has said that former prime minister Imran Khan will not tender an apology to the Islamabad High Court (IHC) in a contempt of court case.

The former information minister, according to The News, also stated that it is “really sad” that a full bench is hearing this case.

In response to a query regarding Khan’s remarks about the female judge, Fawad questioned if they [the court] should not feel ashamed of such an act.

A larger bench of the IHC earlier this week Tuesday issued a show-cause notice to Khan after taking up contempt of court proceedings against him for threatening Additional Sessions Judge Zeba Chaudhry during a public rally.

The court summoned Imran Khan in a personal capacity on August 31, and forwarded the case to the Chief Justice of Pakistan Umar Ata Bandial, seeking the inclusion of more judges on the bench.

Talking to a private TV channel talk show, Fawad said that PTI leader Shahbaz Gill was tortured and the IHC directed the Islamabad inspector-general of police to hold an inquiry.

Fawad wonder whether it was a joke that the IHC sought an inquiry despite the medical board confirming that Gill was inflicted custodial torture.

Gill has been sent on judicial remand in cases related to sedition and arms recovery till September 7. The PTI leader was taken into custody on August 9 and his remand has been extended thrice.

Reiterating the party’s narrative of Gill being tortured in police custody, Fawad said that Gill’s “private parts were given electric shocks and they [police] should feel ashamed of such barbaric acts”.

He called on the political forces to play their part in making Pakistan a truly democratic country. Fawad added that PTI, during its tenure, had made it clear that institutions should reduce their interference in the government.

Fawad said that politicians should sit together and make judicial reforms and ask media houses to ensure responsible journalism. He said the PTI had taken up these issues during its tenure.

Things have gone upside down in six months as Pakistan is heading towards a Burma-like situation, he said. He claimed that the media was being gagged, raids are being conducted on media persons and politicians are being tortured.

Fawad said that people were targeted during the Ziaul Haq era and after that such a situation never arose but in this regime, politicians are being maltreated and this situation is highly unfortunate for Pakistan. He said that it is now an open secret that the PTI government had the support of the establishment and today people know well which decisions are taken and where.

He said that social media is a huge platform and things cannot be kept secret.

Fawad said that the disqualification of Khan is not an issue for PTI but for the entire nation as the former PM is the only leader having a countrywide presence and the PTI is the only federal party.

“Khan is the only leader in Pakistan who is listened to even in remote areas like Chagai and his voice is heard from Gwadar to ex-Fata region.”