Imran Khan spews venom against an institution that ‘raised him’: PM Shehbaz Sharif 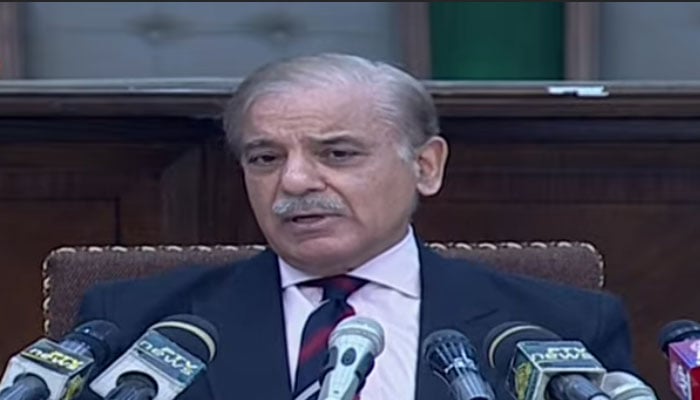 LAHORE: As PTI heads towards Islamabad with its long march, Prime Minister Shehbaz Sharif on Sunday said that Imran Khan is spewing venom against an institution that “raised him”.

To a question by a YouTuber in Lahore on the DG ISI’s presser, the premier said that the PTI chief “severely attacked” the Pakistan army. He added that the institution works for the defence of Pakistan.

“This institution’s officers and troops, since Pakistan’s inception, have made numerous sacrifices be it wars or terrorism,” said the premier. He added that the army fought against terrorism at a time when no place in the country was safe.

“Then you spew venom against such an institution. Was there an illegal action taken? Tell me was the vote of no confidence illegal or unconstitutional?” asked PM Shehbaz. He added that the former prime minister offered an extension to the army chief to ensure the failure of the vote of no-confidence that ousted him.

“He used to call me a boot polisher and whatnot and in order to defeat a constitutional action in parliament, Imran Khan made an unconstitutional offer,” said the PM.

“He spews venom against an institution that raised him,” said the premier. He also reminded the audience that the institution removed all barriers to support his predecessor and gave him the support that no one got as the premier in the country’s 75-year history.

“I say it in lighter vain that had we gotten 20% of that support, Pakistan would have skyrocketed under Mian Nawaz Sharif’s leadership,” said the PM. He added that the PTI chief “failed” despite all this support.

Giving an example of a car being pushed to start, the premier said that Khan failed despite getting all this push. He added that today the former prime minister uses Shahbaz Gill or Azam Swati to make statements against that institution.

“The things that Imran Khan is doing even an animal does not do that. Even a witch attacks after skipping three homes,” said the PM. He added that Khan will not be able to thank the institution all his life for the favours it did to him even if he tries to do it all his life.

“They raised you and did whatnot. Got money from Saudi Arabia, China, and Qatar and begged. Put everything at stake for Pakistan’s benefit,” said the premier.

On the DG ISI Lt Gen Nadeem Anjum’s presser with the military spokesperson, PM Shehbaz confirmed that the official had taken permission from him before addressing the media.

“I have never seen a liar like Imran Khan in my life,” said PM Shehbaz.

Ready for talks with India: PM

To a question on improving ties with India, PM Shehbaz said he is ready for talks with New Delhi but on certain conditions if it is serious about it.

“This is not the time for fighting and wars. I invite India to come and sit at the table,” said the premier, adding that if New Delhi does not wish to address Kashmir then everything would be meaningless.

PM Shehbaz also shared that during his visit to Saudi Arabia he had spoken about resolving the Kashmir issue. He added that Riyadh is willing to become a mediator between New Delhi and Islamabad.

The premier also shared that he held fruitful talks with Saudi Arabi’s Crown prince Mohammad bin Salman, adding that he also showed a willingness to invest in Pakistan.

On the PTI’s looming long march, PM Shehbaz said that it was the responsibility of the elected coalition government to ensure stability in the country and would not allow anyone to create political and economic crises.

“Any attempts to enter the Red Zone would be thwarted under the relevant laws,” said the premier.

Continuing his attack against the PTI chief, the prime minister said that Khan had a personal agenda, and is hell-bent on pushing the country into turmoil and economic destruction.

“Unfortunately, Imran Niazi’s thinking revolves around his personal vested interests. Even he did not spare his close friends who were sidelined,” he added.

— With additional input from APP