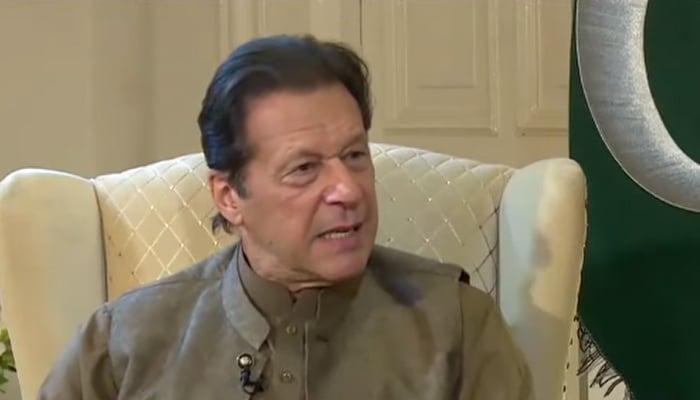 “They held a press conference after claiming that they have distanced themselves from politics,” Khan said during an interview with a private news channel.

Hostile forces want our army to be weak, Khan said, reiterating that he did not say anything that would harm the army.

“If I respond to the press conference, it will be directed at the army and I don’t want to hurt them in any way,” he added.

Earlier today, Director-General Inter-Services Intelligence (ISI) Lt Gen Nadeem Anjum took a jibe at the Khan saying that “if the commander-in-chief is a traitor then why did you [Khan] meet him in hiding?”

“Meeting [him] is your right but it cannot be possible that you meet him at night and call [him] a traitor in the day,” stated the DG ISI.

Lt Gen Anjum had said that the military was called “neutral and an animal” as they had committed treason by refusing to be part of an “illegal” decision. He said that the refusal to do the “illegal job” was not the decision of a single person or army chief but of the entire institution.

Regarding constant criticism of him calling them “neutrals”, Khan said that personalities make mistakes but “I want to save the institutions.”

“They accuse me of holding talks behind closed doors then they should also share details of those talks,” Khan said, adding that he heard about the army chief’s extension. “If they can offer an extension, we [PTI] could have also offered him an extension.”

‘PTI will not enter Red Zone’

Responding to questions about his party’s “Haqeeqi Azadi March” slated to kick off on Friday (tomorrow), Khan said that his party would not enter Islamabad’s Red Zone during the protest, adding that the march will remain peaceful.

Talking about Faisal Vawda, Khan said: “I have seen people closely. Those who were once close to me are now part of the other side because of the difficult times.”

Expressing his regret, the PTI leader said that he knew at whose request Vawda held a presser.

A day earlier, the ex-minister said that PTI’s long march would “witness bloodshed, death, and funerals“. He had said that “important and common” people’s deaths will take place in the long march, adding that there were “ulterior motives” behind the march to Islamabad.

Answering a question about the alleged custodial torture and stripping of aged PTI leader Azam Khan Swati, Khan said the move dishonoured the country and the army.

Moving on to the regime change conspiracy, the PTI leader said that he was already receiving reports and knew about the conspiracy.

“I had told [Chief of Army Staff General Qamar Javed] Bajwa that the economy will suffer if the conspiracy succeeds,” he added.

The PTI leader added: “They could have stopped the conspiracy but they didn’t.”

Taking a jibe at the ruling alliance, Khan said: “[Finance Minister] Ishaq Dar submitted an affidavit to admit he was involved in money laundering for the Sharif family but nothing happened.”

He went on to complain that in his case, he gets relief from one case but the ruling lawmakers file another case against him.

‘Arshad Sharif’s mother should be asked about threats’

Commenting on slain journalist Arshad Sharif’s death, Khan said one should ask his [Sharif’s] mother about the threats.

“They are asking his [Sharif’s] mother regarding threats received from me,” he said, claiming to have the text he had received from Sharif, stating that his life was in danger.

Khan admitted that he advised Sharif to leave the country but he was brave and rejected his suggestion. “Sharif couldn’t speak while staying in Pakistan and everybody knows why did they want to shut his mouth,” the PTI chief stated.

Khan went on to say that he will march towards Islamabad tomorrow because if these “thieves” continue to rule the country, the future will be destroyed.

Sharif, a popular TV anchorperson as well as an investigative journalist, was killed by the Kenyan police in a “mistaken identity” shooting on Sunday night near the Kenyan capital of Nairobi.

‘My servants are being paid for spying on me’

Moving on, the former prime minister said that — with the exception of Najam Sethi — he never had a case registered against any journalist for criticising his party.

“When I was the prime minister, I did not get justice. No institution should be above the law, but the mafias are. They keep seeking NROs,” the ex-premier said.

He said the kind of restrictions he has witnessed since his ouster in April was unprecedented. “If they say that they will not allow destabilisation then they should not have resorted to the actions they did six months back.”

The former prime minister said he is being treated like an enemy of the state, a criminal, and a traitor for the last six months. “My servants are being paid for spying on me.”

Khan said that the secure telephone line at the Prime Minister’s Office is also being tapped — referring to the recent audio leaks, featuring government and PTI representatives, that shocked the country.

“Now, my people are being approached, and one of them has [sides].”

“My party’s members were asked to change sides for Rs25-20 million [during the no-confidence motion]. In response, my people also decided to do the same.”

Khan added that he considers Interior Minister Rana Sanaullah a criminal and that he would only talk to the government if it is ready to hold elections — “which right now, it isn’t.”