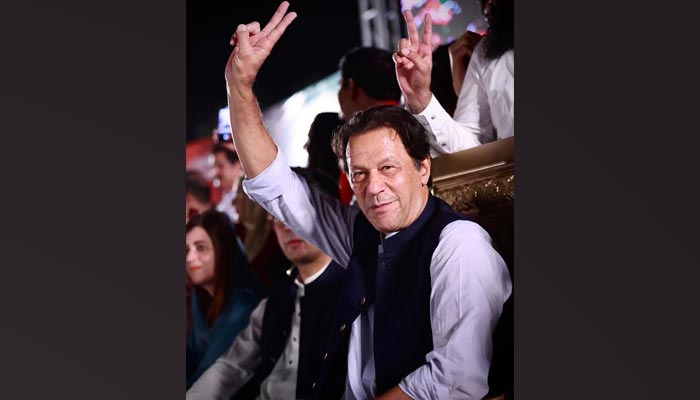 Former prime minister and PTI chief Imran Khan on Saturday once again skipped the announcement of his protest date while addressing his party’s power show in Punjab’s Rahim Yar Khan district on Saturday.

Last week, the PTI chief announced the resumption of his “Haqeeqi Azadi” (true freedom) movement from Saturday (September 24) where he was to will reveal the date of his final call for the public to take to the streets.

However, while addressing the jalsa today, which was the first of many public gatherings planned, he ignored the announcement of the protest date.

“[Interior Minister] Rana Sanauallah, listen [to me] with open ears: this time we will come with full planning. I know what he will do, but no one knows what I will do,” he said, adding that he will give the protest call “when my opponents believe that I have given up and that day is not far”.

He said it was his party’s democratic right to stage a peaceful protest. “This person [Rana Sanaullah] who should be in jail is lecturing us on democracy.”

Khan went on to say that his call for the next protest against the coalition government will be the last and added that once the call is given, the movement will continue till the date of the election.

“That call will be given to save Pakistan through free and transparent elections. We don’t have any other way other than elections to save the country.

“Without political stability and a stable government, the country’s economic woes cannot be solved, and only free and transparent elections can bring stability to the economy and the country,” he said.

Referring to Sanaullah’s claim regarding party supremo Nawaz Sharif’s return, he sarcastically told Nawaz that he “shouldn’t worry as the people of Pakistan will give him a grand welcome”.

“[Former finance minister] Ishaq Dar is returning to Pakistan on the basis of a deal cracked under the NRO; nobody should think that we will quietly watch this drama,” the PTI chief said.

PTI leaders in major cities including Karachi, Islamabad, Lahore, Multan, Peshawar and others set up screens in their respective areas to show his live speech.

Since being ousted from power in April this year, Khan has been holding rallies across the country, demanding free and fair snap polls.

Sanaullah takes a jibe at PTI’s strength at RYK jalsa

Taking a jibe at the tall claims regarding the PTI supporters present at the jalsa today, Sanaullah said: “Kaptan [sahab], you used to say that after monitoring Saturday’s preparation you will give a call for the long march towards Islamabad.

“[…]after May 25 if this is the preparation of your Tiger Force then I regret that our [federal government’s] preparation went in vain,” he wrote on Twitter.