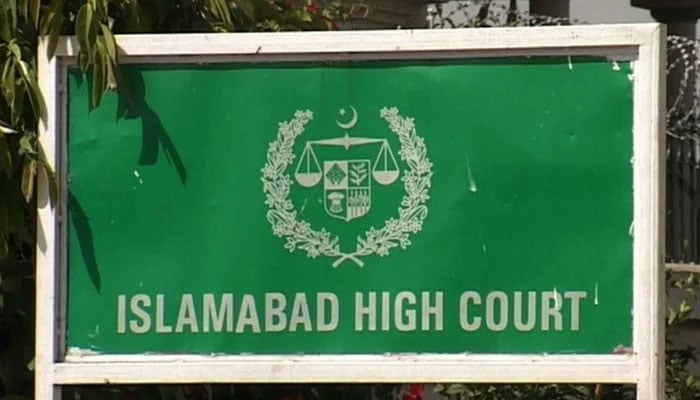 ISLAMABAD: The Islamabad High Court (IHC) on Monday stopped the Election Commission of Pakistan (ECP) from holding by-elections NA-95 Mianwali-I — the seat which was declared vacant by the electoral body following Imran Khan’s disqualification in the Toshakhana reference.

The orders were issued by IHC’s Justice Aamer Farooq on a petition filed by the PTI chief challenging the ECP’s disqualification order.

At the outset of the hearing, the judge asked Imran Khan’s counsel whether he had submitted any request to provide additional documents.

At this, Khan’s counsel Barrister Ali Zafar told the court that he had submitted a request to add ECP’s notification. He added that his client was de-seated from the Mianwali seat after he was disqualified.

“Was this reference submitted by the speaker?” asked Justice Farooq. To which, Zafar responded in the affirmative.

While arguing about the case, the legal counsel told the court that once the speaker sends a reference to the ECP it has to submit its findings regarding the case. He added that the constitutional body has to do so within 90 days.

Zafar also informed the court that each lawmaker has to submit their asset details by June 30. If something is sold, then the proceeds have to be disclosed as well, said the lawyer.

“If any member assembly does not tell these details, his membership is suspended. If the return is not submitted within 120 days or if the information is given wrongly, then the member can be considered being involved in corrupt practices,” said Zafar.

The lawyer contended that there was no penalty or disqualification for misdeclaration but a person can be imprisoned for up to three years and be fined.

“The law says that the crime of misdeclaration will be held in the trial session court, which can be punished,” said Zafar. He also added that the ECP in the case plays the role of the complainant.

“ECP has exceeded its authority by passing the decision of disqualification. Currently, there is no justification for disqualification, it is possible only after the trial,” said Zafar.

However, Justice Farooq turned down the request and issued orders to stop the by-election in Mianwali. The court also issued notices to the ECP against Imran Khan’s disqualification.

Earlier this month, ECP, in a consensus verdict in Toshakana reference, disqualified former prime minister Imran Khan and ruled that the PTI chairman is no more a member of the National Assembly.

Criminal proceedings will be initiated against the PTI chairman for misdeclaration, the verdict said.

The ECP stated that Imran Khan submitted a false affidavit and was found involved in corrupt practices under Article 63(1)(p).

Under the said article, a lawmaker is disqualified for the time being from being elected or chosen as a member of the Majlis-e-Shoora (Parliament) or of a provincial assembly.

The 28-page reference identified 52 gift items of Toshakhana received by the former prime minister Khan, violating the law and rules, taken away at nominal prices and most of the gifts were sold in the market, including some precious watches.

This withholding of information is tantamount to lying which, according to Ranjha, is a crime under Section 137.

He thus said that Khan was no more Sadiq and Ameen and should be slapped with disqualification for life from contesting the election under Article 62(1)(f), Article 2, Article 3 of the Constitution.