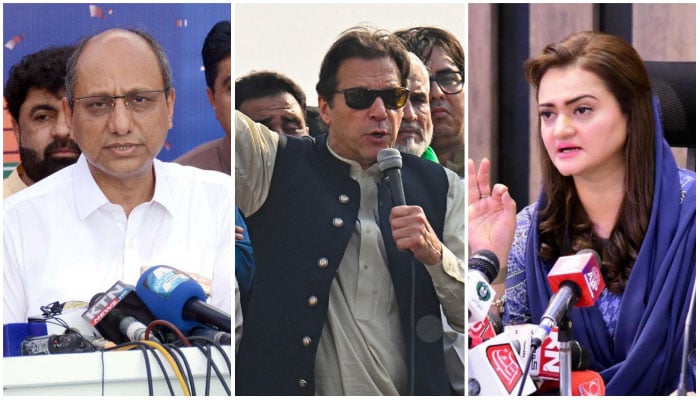 Lawmakers of the ruling alliance called out the ex-prime minister and PTI Chairman Imran Khan for his remarks related to the imposition of martial law in the country.

On day four of the PTI’s “Haqeeqi Azadi March”, Khan in an interview with a private channel said if the government wants to impose martial law, they can do so but stressed that he isn’t scared of that. “Whatever is happening nowadays is worse compared to what happened during ex-president Pervez Musharraf’s tenure”, he said.

“They are cowards and enemies of the state who only wish to scare me,” Khan told the reporter.

In a statement, Aurangzeb questioned why this “foreign-funded fitna (rabble-rouser) was threatening the government of bringing about a revolution through arms?”

“Khan is inviting the army to interfere in the political activities of the country to remove the coalition government from power,” she maintained.

Condemning his statement, Climate Change Minister Sherry Rehman said: “A politician who claims to have 26 years of political experience shouldn’t be saying that the government can impose martial law if it wants to.”

“Democratic politicians do not provoke institutions to impose martial law. [It] clarifies that Khan wants this,” she wrote on Twitter, adding that the PTI chief believes that if he is not in power, he won’t let anybody else rule either.

Rehman further added that institutions are saying that they do want to stay apolitical but Khan wants their interference in order to secure a deal.

“Khan is mentally paralysed and a confused person,” Ghani said, adding that democracy in this country is prevailing because of the struggles of the political parties.

‘PTI wants to wrap  system in  desire for power’

Minister for Poverty Alleviation Shazia Marri called out Khan, saying that politicians have shed blood for democracy and have embraced martyrdom during this struggle.

“Khan’s statement of imposing martial law is the height of selfishness,” she said.

Former chairman Senate and PPP stalwart Raza Rabbani, condemning Khan’s statement, said that PTI wants to “wrap up the system in the desire for power.”

“Derailment of the system will have dangerous effects,” he said, adding that martial law or technocrat government will further deepen the internal crisis in the country.