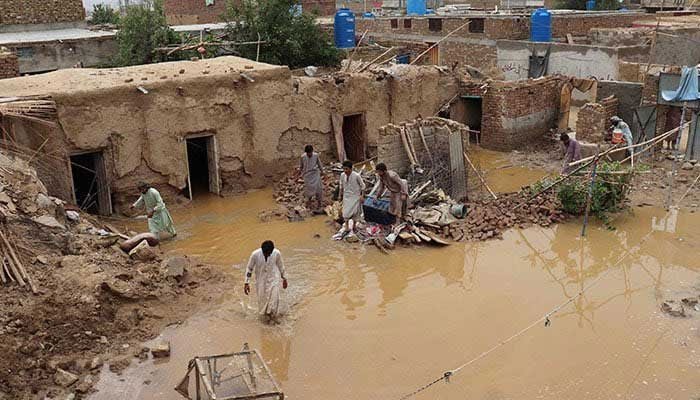 The flood-hit areas in Sindh are witnessing an extraordinary increase in different diseases as four people, including three children, died of gastrointestinal diseases in Khairpur, Geo News reported.

A young man suffering from gastroenteritis died in Dadu. The deceased had to be buried at home owing to the cemetery being inundated by floodwaters.

The number of people suffering from different diseases, particularly stomach disease, multiplied during the last two days in the floodwater-submerged areas of the province. More than 340,000 people suffer from gastroenteritis, cholera, dengue, malaria and diarrhoea.

Meanwhile, heatstroke, cholera and other stomach-related diseases have become common in the Tank district. The cases of snake and scorpion bites are also on the rise in the district.

In the Balochistan area of Naseerabad, the flood victims are waiting for food and medicine for their children.

One-third of Pakistan is under floodwater

AFP adds: Aid efforts ramped up across flooded Pakistan to help tens of millions of people affected by relentless monsoon rains that have submerged a third of the country and claimed more than 1,100 lives.

The rains that began in June have unleashed the worst flooding in more than a decade, washing away swathes of vital crops and damaging or destroying more than a million homes.

Authorities and charities are struggling to accelerate aid delivery to more than 33 million people affected, a challenging task in areas cut off because roads and bridges have been washed away.

In the south and west, dry land is limited, with displaced people crammed onto elevated highways and railroad tracks to escape the flooded plains.

“We don’t even have space to cook food. We need help,” Rimsha Bibi, a schoolgirl in Dera Ghazi Khan in central Pakistan, told AFP.

Pakistan receives heavy — often destructive — rains during its annual monsoon season, which are crucial for agriculture and water supplies.

But such intense downpours have not been seen for three decades.

Pakistani officials have blamed climate change, which is increasing the frequency and intensity of extreme weather around the world.