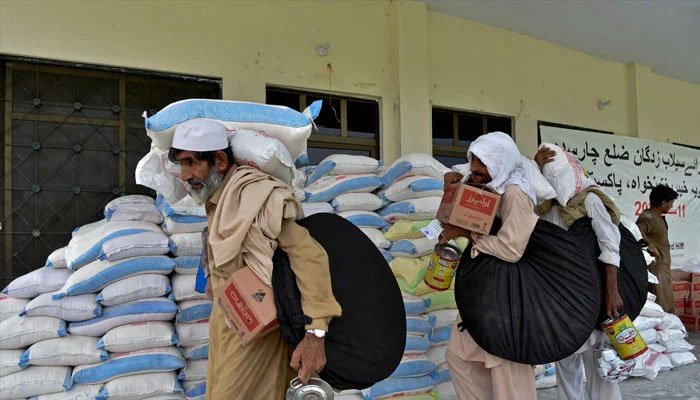 The government’s flood relief assistance and distribution activity will now be operated digitally with the Digital Flood Dashboard as per the directives of Prime Minister Shehbaz Sharif, in a bid to ensure transparency.

The decision was made in a meeting chaired by the premier on Saturday. The digital dashboard will provide information to the general public about financial support and relief goods being received and distributed among the flood victims.

During the meeting, the prime minister was informed that the dashboard had been made by using latest technology to provide all details about relief activities and receipt and distribution of goods and assistance. Besides this, the general public and media will also be informed about relief measures.

The prime minister also announced that the audit of financial aid received for flood victims would be conducted by the Accountant General Pakistan Revenue (AGPR) and the world’s reputable audit firms to ensure transparency. He also reviewed the restoration of services in affected areas and called for expediting the rehabilitation of roads, bridges and power supply. He directed the provision of basic necessities of life to the victims.

Meanwhile, Federal Minister for Finance and Revenue Miftah Ismail has said the government had provided Rs70 billion for the relief and rehabilitation of flood-affected people.

Talking to the media after a meeting with office-bearers of the All Pakistan Textile Mills Association, Miftah Ismail said that another Rs50 billion would be provided to the affected people. He said that every penny received from abroad would be audited internally and externally. He mentioned that 33 million people were currently living under the open sky and Prime Minister Shehbaz Sharif was working day and night for their early rehabilitation.

“The prime minister would soon hold meetings with industrialists and business people,” he said, adding that APTMA had deposited Rs400m into the Prime Minister’s Flood Relief Fund and it would donate another Rs1bn.

Federal Minister for Railways Khawaja Saad Rafique expressed gratitude to all countries that have helped Pakistan in the time of difficulty.

On the other hand, the death toll from floods in Sindh surged to 621 as 12 more people died during the last 24 hours on Sunday.

As floods swept away the Chak-Nizam bridge, the first defence line of Dadu, authorities Sunday launched Plan B under which a dyke is being constructed along the embankments of the Burda Canal to protect the city. Heavy machinery is being used to build a dyke up to 15 feet high, authorities said, adding that flash floods from the Manchar Lake had breached the Dadu ring bund, posing a threat to the city.

Thousands of panicked people left Dadu following a fresh spell of floods, adding to the growing number of displaced people. The district has been surrounded by floodwaters, leaving only one passage for the residents to leave the city as the water level in the Manchar Lake, the nation’s largest freshwater lake, is continuously rising. Rising floodwaters have washed away the first defence line of the city of over one million people, forcing the administration, backed by army troops, to strengthen the remaining embankments.

Thousands of people have been lodged in tents or are waiting for shelter under open skies along the main highway that leads to Hyderabad. Either side of the highway could be seen inundated by floodwater for miles. Hundreds of citizens were seen leaving the city on mini-trucks, vans and rickshaws. Many others along with their livestock were also spotted trudging along the road under the baking sun. The huge flooding also forced the administration to shift nearly 400 prisoners from the Dadu district jail to the Hyderabad prison.

Reports said that breaches in nullahs in Thari Mirwah, Faiz Gunj and Gambat had inundated many villages. Faiz Gunj and Thari Mirwah cities are also submerged, which displaced thousands of people. People of Gambat city of Khairpur also fear flooding if authorities failed to fortify the nullahs. In Naushehro Feroze, over 50 villages are still submerged despite the passage of several days and locals are facing an outbreak of waterborne diseases.

Meanwhile, Prime Minister Shehbaz Sharif, taking notice of a possible threat to a 500KV grid station in Dadu from floods, directed for utilisation of all resources to protect the grid station. He directed civil and military high-ups to immediately save the grid station from being affected by floods, the PM Office media wing said. On his directive, three excavators have been sent from Moro city. The prime minister is supervising the restoration and rehabilitation of flood victims round the clock, it added.