Five girls in Afghanistan, aged between 14 and 17, designing a cheap ventilator. 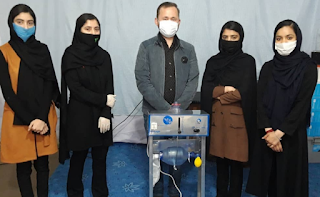 The all-female robotics team in Afghanistan who made a cheap ventilator out of Toyota parts.
The Afghan Girls Robotics Team made headlines when they were denied entry to the US in 2017 – now they’re supporting the pandemic fight.