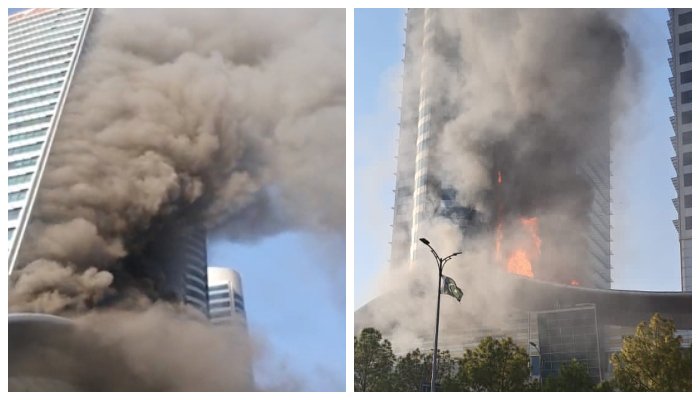 ISLAMABAD: A fire broke out in the food court of a popular shopping mall in Islamabad Sunday, but was quickly doused out to a certain extent as authorities scrambled to rescue.

In a statement, Islamabad Police said that people were rescued and safely evacuated from the backdoor of the mall — which was engulfed in smoke after the fire. Videos on social media platforms showed smoke emitting out of the building.

The search operation is still underway, and no person or shop has been harmed, the police said, adding that the fire inside the mall has been doused out and a helicopter has also been called in.

“However, the fire has not been completely extinguished on the outside of the mall,” the police said, requesting the citizens to avoid travelling near the mall to ensure that rescue teams could do their work uninterrupted.

All resources are being utilised to control the fire as early as possible, the CDA added.

The Islamabad Police later said that the building, under the orders of the deputy commissioner, would be sealed once the rescue operation was completed.

In a separate statement, the police said that due to the fire, diversions have been placed for traffic from F-8 Exchange Chowk to Khyaban Chowk at Jinnah Avenue.

Taking notice of the incident, Interior Minister Rana Sanaullah asked authorities to use everything at their disposal to ensure that the situation is under control.

Sanaullah, in a statement, said that the reason behind the fire should be ascertained and a detailed report submitted to the Interior Ministry.

PML-N Vice President Maryam Nawaz prayed for the situation to get better.