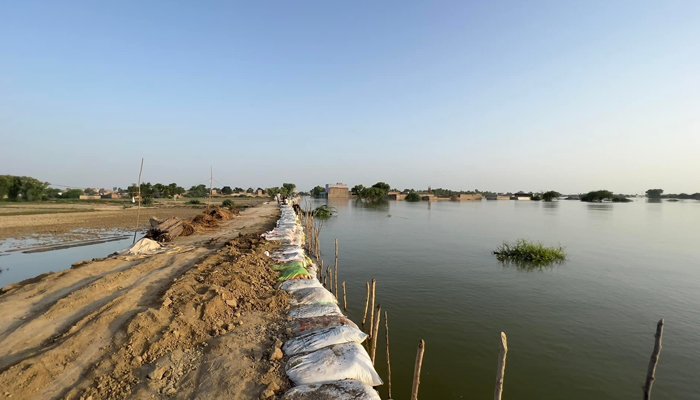 A threat of floods hitting Sindh’s Johi city looms after unidentified men created a breach in the Johi Branch canal, it came to light on Saturday, as the country battles cataclysmic floods.

Scores of residents from nearby areas were seen attempting to plug the breach through their own resources to save the city from sinking, according to Geo News.

Meanwhile, the authorities made a breach in the Larkana-Sehwan bund to prevent floodwaters from entering Dadu City.

In another incident, flash floods resulted in a breach in the Dal branch and the floodwaters entered a grid station in Bhan Saeedabad and hit the city’s ring dykes.

A large number of people have gathered there and are trying to strengthen its embankments.

It is pertinent to mention here that the water level in Sindh’s two barrages is decreasing rapidly, however, a high flood is currently passing through Kotri Barrage.

The floodwater is overflowing at some points at the Kotri Barrage.

The diversions made in Pakistan’s largest lake, Manchar, have not worked as the water levels of the Indus River rose and the lake’s water began to flow backwards instead of into the river.

The Indus Link seam drain near Tilti has cracked due to the pressure of the lake water, posing a threat to the city of Bhan Saeedabad, while the displacement of citizens continues.

Strong water flows from Manchar Lake have caused destruction, affecting more than 150,000 people in more than 500 villages across seven union councils in Sehwan.

While the Pakistan Army is conducting rescue efforts in the affected areas, there are many locations where people are trapped in water.

A 150km stretch of land from Qamber Shahdadkot to Manchar Lake is completely submerged and hundreds of villages in the Khairpur Nathan Shah, Wara tehsils, Sujawal, and Dadu tehsils are now underwater.

The bogies of the relief train between Budapur Railway Station and Khaot have derailed as a result of water on the tracks.

Record monsoon rains and melting glaciers triggered the disaster that has shown no sign of abating for the last month. The United Nations and Pakistan have linked the extreme weather to climate change; some 600,000 people have fled their homes.

As many as 33 million people of the 220 million South Asian nation have been affected in some way by the floods that swept away houses, roads, railways and bridges and submerged around 4 million acres of farmland.

Pakistan has estimated the financial loss so far at around $30 billion.

Health Minister for Sindh, Azra Fazal Pechuho, said a total of 856,000 patients had been treated since the floods began, mostly at mobile hospitals because more than 1,200 health facilities were under water.

As a result of the monsoon rains and floods, a total of 590 people have lost their lives in Sindh, with 12 deaths in the last 24 hours, the Provincial Disaster Management Authority’s (PDMA) data showed. Some 8,321 people have also been injured.