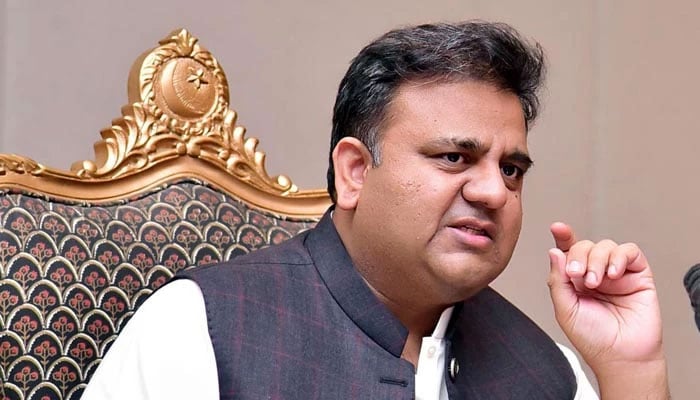 Vice-President PTI Fawad Chaudhry said the people have rejected the verdict against party chief Imran Khan by the Election Commission of Pakistan (ECP), which he termed as ‘dishonest.’

The ECP, in a consensus verdict in the Toshakana reference on Friday, disqualified Imran Khan and ruled that he is no longer a member of the National Assembly. The election commission directed criminal proceedings to be initiated against Imran for misdeclaration.

The ECP ruled that Imran Khan submitted a false affidavit and was found involved in corrupt practices under Article 63(1)(p).

Fawad said that the ECP verdict against Imran Khan is nothing but a slap on the face of 220 million Pakistanis.

The PTI leader called upon the people to come out of their houses for their rights, as the Constitution of Pakistan can be protected by overturning these assemblies.

Fawad Chaudhry earlier spoke to the media after the ECP delivered the verdict. He said the ECP’s attitude had always been the worst. “We never pinned any hopes on it.”

“This is a shameful decision. They have disgraced the 220-million-strong-nation.”

Chaudhry termed the decision an assault on the institutions of Pakistan. He went on to say that the commission had given the verdict they had hoped for. “They are only targeting Imran Khan,” he said.

The ECP had reserved its verdict in the Toshakhana case on September 19 after arguments were completed from both sides. A five-member bench of the ECP, headed by Chief Election Commissioner Sikandar Sultan Raja, heard the case.

The 28-page reference identified 52 gift items of Toshakhana received by the former prime minister, violating the law and rules, taken away at nominal prices and most of the gifts were sold in the market, including some precious watches.

This withholding of information is tantamount to lying which, according to Ranjha, is a crime under Section 137. He thus said that Khan was no more Sadiq and Ameen and should be slapped with disqualification for life from contesting the election under Article 62(1)(f), Article 2, Article 3 of the Constitution.