Death toll from torrential rains in Balochistan surges to 215 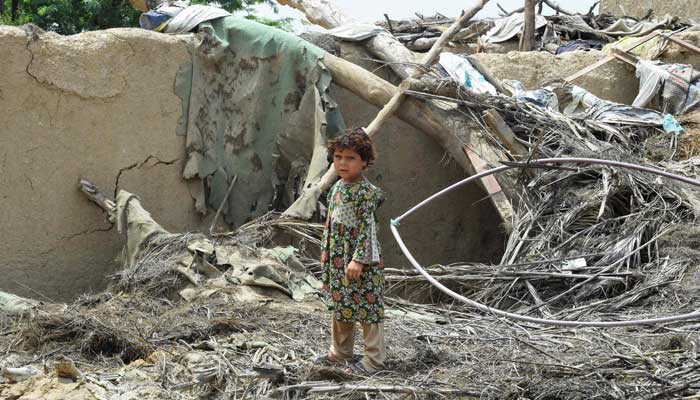 QUETTA: Torrential rains and flash floods continue to play havoc in Balochistan amid the fourth spell of monsoon, with eight more people killed in rain-related incidents on Saturday, taking the provincial death toll to 215 since June 1.

According to NDMA, the rains have inflicted major life, property and livestock losses. While Balochistan was the most-affected region, in the last 48 hours Sindh witnessed maximum rainfall that caused heavy life, property and infrastructure losses. Furthermore, the Met Office has warned of a new spell forecast that will cause further rains in eastern Balochistan, south Punjab and Sindh in the next 24 to 36 hours.

Meanwhile, the Chief of Army Staff (COAS) General Qamar Javed Bajwa called Commander Balochistan Corps and directed him to assist the provincial government in rescue and relief operations during floods.

According to the Inter-Services Public Relations (ISPR), the army chief directed the Balochistan Corps commander to get an update on the flood situation and undertake all measures to assist Balochistan in rescue, relief and rehabilitation efforts on an emergency basis in coordination with the civil administration.

“Pakistan Army stands with flood-affected population in this difficult testing time and shall undertake this assistance effort as a national obligation,” the COAS said.

Incessant rain and flash floods in Balochistan have affected 18 bridges and 690 kms of the highway while it also killed as many as 107,377 cattle, damaged 23,117 houses while 6,057 houses collapsed. Traffic on the National Highway at Bolan connecting Balochistan with Sindh through Quetta-Sibi-Sukkur has been partially restored.

However, due to heavy rains, the highway was closed at various points due to the flow of flood water in the Harek Causeway, Gashtri Nallah, Drinjan Nallah and Yaru Causeway. The Quetta-Karachi road links through Lasbela are disconnected for almost a week at Uthal while due to landsliding and continuous rains, traffic at Quetta-Zhob and Quetta-Lorali connecting Balochistan with Punjab and KPK was also suspended for the last two days. The railway track at Notal and Dera Murad Jamali was also inundated in flood waters, suspending rail service between Balochistan and the rest of the country.

Chief Minister Sindh Murad Ali Shah visited different parts of the rain-hit areas to monitor the relief work and assess damages. During the visit, they declared Sajawal and Badin as disaster-struck areas.

Loss of life and infrastructure continued to mount amid torrential rains in Hyderabad, Khairpur, Sukkur, Nawabshah, Khairpur, Dadu and other cities of Sindh. Hill torrents were heading towards Majhand city of Dadu sending off alarms to the residents of the area who were trying to go to safer zones and higher ground. The Nizamani Dyke was breached which inundated many villages of Nara Town and UC Jalalani and Shank dyke in Ghotki was also breached which inundated many villages. Pak Army reached Khairpur and other cities to rescue the rain victims.

Earlier in the day, the frustrated people of Khairpur protested at the office of Assistant Commissioner Kot Diji and blocked the National Highway against the administration’s apathy to take rescue and rehabilitation measures. During the protest, the guards of Dinal Wasan, brother of PPP MPA Munawar Wasan, thrashed them when they refused to lift the road blockade.

In Karachi, two bodies remained untraced, three days after a vehicle with six family members and a driver drowned Wednesday in Karachi’s Malir River after being swept away by strong currents from the National Highway Link Road. According to rescue officials, five bodies, including children, were recovered.

Under the supervision of PDMA, local administration and Pak Army relief and rehabilitation operation is going on in the affected districts. “Relief materials including 600 tents, 1400 food packets, 400 blankets, 400 mats and 400 gas cylinders were distributed among the victims in Naseerabad, Pishin, Mastung, Qila Saifullah and Kohlu districts.

In a related development, Chairman of National Disaster Management Authority (NDMA) Lieutenant General Akhtar Nawaz said the country received an unprecedented monsoon rainfall and the Authority, keeping in view the recent spell in Sindh, has sent a special relief package to its flood-affected areas.

Addressing a ceremony for relief assistance being dispatched to flood-hit areas of Sindh, the NDMA chairman said the monsoon rains this season were 150pc above normal than the past 30 years’ recorded average of the country. Lt General Satti said Balochistan was the most-affected region due to heavy monsoon rains, whereas, now in the past 48 hours, Sindh was witnessing the maximum rainfall that caused heavy life, property and infrastructure losses.