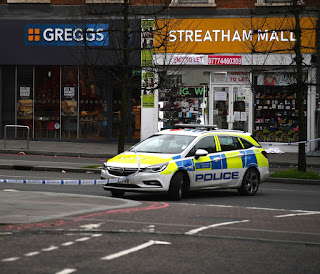 Police community support officers talk to a man as he sits with his shopping as the spread of the coronavirus disease (COVID-19) continues, in Northwich, Britain.

A man who coughed on a police officer and threatened to infect him with coronavirus was on Wednesday sentenced to six months in jail in Britain, a police statement said.
Adam Lewis, 55, was sentenced under a specific law governing assaults against emergency workers, which was introduced in November 2018 and carries a maximum jail term of 12 months.
He was stopped after allegedly trying the door handles of cars in central London on Tuesday afternoon, by a policeman who then tried to stop and search him.
Lewis smashed a bottle of wine he was holding on the floor and then verbally threatened the officer, according to a statement from London’s Metropolitan Police.
“I am covid (19 positive) and I am going to cough in your face and you will get it,” he reportedly said, before coughing on the police officer.
Lewis then tried to spit in the officer’s face and threatened to bite him, the Met said.
He was arrested and appeared at Westminster Magistrates’ Court on Wednesday.
Chief Superintendent Helen Harper said: “While these type of assaults are thankfully a rare occurrence, this incident was horrendous and if we do encounter this type of unacceptable behaviour we will be robust in our response.
“I hope the sentence today conveys a strong message that it will not be tolerated.