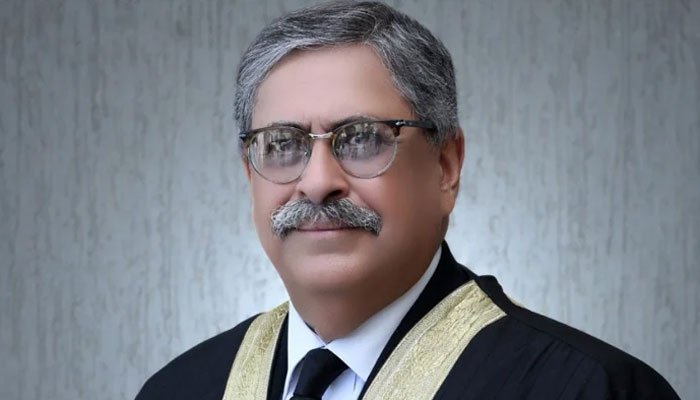 Islamabad High Court (IHC) Chief Justice Athar Minallah on Thursday asked PTI to inform the court about its intention of returning to Parliament in five days but stopped short of issuing an order on a petition filed by the lawmakers whose resignations have been accepted.

IHC CJ Athar Minallah remarked that the court cannot issue orders to the speaker and advised the PTI to return to the Parliament as it was the forum to resolve political matters.

The IHC CJ made the observations while hearing the petition of the PTI MNAs whose resignations were accepted by NA Speaker Raja Pervez Ashraf and subsequently denotified by the Election Commission of Pakistan.

At the outset of the hearing, Justice Minallah stated that the court respects the Parliament, adding that a similar petition was also filed before as well on this matter.

“Is this the political party’s policy,” wondered the judge, while acknowledging that rest of the PTI MNAs’ resignations are yet to be accepted. People trusted the representatives and sent them to Parliament, he remarked.

“This court cannot issue orders to the speaker of the National Assembly,” remarked Justice Athar Minallah on the PTI’s petition asking the court to direct the custodian of the lower house to investigate their party’s resignations. He also observed that in the Shakoor Shad case IHC had only asked for a review.

“This is a political issue and Parliament is the place to resolve political tussles. You should hold dialogue with political parties to resolve problems,” said the IHC CJ. Do these resigned members really want to go to Parliament and resolve the people’s issue? he wondered.

“We have to see if the petitioners came with clean hands before the court or not,” remarked the judge.

At this, Barrister Ali Zafar, the counsel for the PTI lawmakers, told the court that his clients have not approached the IHC against the party policy.

However, the judge observed that the petitioners had themselves admitted that their resignations were “genuine”.

But the lawyer told the court that his clients believe that Speaker Raja Pervaiz Ashraf did not fulfil his constitutional obligation. The resignations were given on the condition that all 123 will be accepted, he added and reminded the court that only 11 were accepted.

At this, Justice Minallah observed that the MNAs whose resignations were pending should return to Parliament then. It is their responsibility to represent people in Parliament, he added.

Zafar responded to this by saying that going to Parliament was a “secondary issue”.

“Then by being members of Parliament they are virtually boycotting the assembly. Think about this and submit an affidavit,” said the judge. In 70 years courts have been dragged in a lot of political matters and this has harmed the judiciary as an institution, he observed.

“This is not a member’s issue, but is also of the people of those constituencies who no longer have representation in Parliament,” said the IHC CJ. He, once again, observed that the members in question have admitted that their resignations were genuine.

“Is your stance that the party forced them to resign? If this is the case then you are going against party policy,” said Justice Minallah.

However, Zafar assured the court that the lawmakers were not going against party policy and clarified that their stance is that the speaker did not fulfil his constitutional obligation.

“Audio leaks have shown how 11 members’ resignations were accepted. Our political objective was to vacate 123 seats, our aim was not achieved so we believe that everyone is still an MNA,” said Zafar.

‘Do not turn democracy into a joke’

At this, Justice Minallah, once again, remarked that the MNAs that have not been de-notified should sit in Parliament.

“Parliament has been disrespected a lot, do not turn democracy into joke”, said Justice Minallah.

But Zafar told the court it was not possible for the PTI to return to the Parliament as the audio leaks have come forward and 11 members have been kicked out.

Once again, Justice Minallah reiterated that political uncertainty in the country can only be ended in Parliament.

‘Court not to facilitate political dialogue’

At this, Zafar once again told the court that he cannot comment on the MNAs’ return to Parliament at this point in time. This depends on the party policy, he added.

“If you suspend the order for the acceptance of resignations then we can go and speak to the NA speaker,” Zafar told the court.

“The court will not facilitate you in political dialogue, petitioners say they do not accept the Parliament. They want to maintain political instability which is not in the interest of the country,” observed IHC CJ.

At this, Zafar told the court that the petitioners never stated that they do not accept the Parliament.

“Court can adjourn the hearing till tomorrow. Go to Parliament and prove your good intentions. Political tussles should be resolved in parliament, not in court,” said IHC CJ.

But the lawyer instead requested the court to give him half an hour to speak to his clients.

At this point, the court rose for a break and the IHC CJ gave an hour to the lawyer to inform him of his client’s decision.

‘Satisfy us in five days if you will go to Parliament’

Once the court returned from the break, Zafar continued with his argument on the legality of the speaker’s decision to accept only 11 resignations.

The lawyer also wished to read out the transcript of the recently leaked audios of the government ministers discussing the resignation issue.

However, the IHC CJ advised Zafar not to delve into it, adding that political uncertainty was not good for the country. He also stated that the uncertain situation on the political front was damaging the economy.

Zafar stated that in the leaked audio Ayaz Sadiq, Azam Tarar and others were deciding on the resignations.

At this, IHC CJ once again told the lawyer not to say that the speaker accepted the resignation at someone’s behest.

“This court respects Parliament’s supremacy [but], members of Parliament are not doing so,” said Justice Minallah.

At this observation, Zafar responded by saying that the PTI’s decision to return to Parliament was political and the court should stay away from it.

At this, Justice Minallah responded by telling the lawyer that the court is willing to give five days to the petitioners to satisfy that they will return to Parliament.

“During this time suspend the speaker’s order de-notifying the resignations. The acceptance of resignations was done by aliens, not by the speaker,” said Zafar.

However, the judge said that the lawyer was only seeking the suspension of the order so the PTI can continue its boycott of Parliament.

However, the lawyer stated that the petitioners wish to remain MPs for which they were seeking the suspension of the order.

“You do not want to go back to represent your constituency but for your politics. Petitioners are asking for suspension of notification to continue boycott under party policy,” observed the judge. He added that no political party is above the Parliament.

Justice Minallah also regretted that no one was talking about civil supremacy today, adding that he wants the petitioner to show the court through their conduct that they would respect Parliament.

“The petitioners should give an affidavit that they do not accept the party policy of boycotting the Parliament,” said the judge.

‘Petitioners should say they believe in democracy’

At this, the judge suggested adjourning the hearing for an indefinite period. However, Zafar did not settle for it as he feared that by-polls will be held on the vacant seats.

“You only wish to stop by-elections?” asked the judge.

The judge then remarked that the petitioners cannot say they do not obey Parliament and will not go back, warning that the court would not entertain or take notice of the application.

“First, the petitioners should satisfy that they have really come with clean hands. Also, say that they believe in democracy and the supremacy of Parliament. It cannot be possible that you say that you will agree to things that happen according to your will,” said the IHC CJ.

Following this remark, the judge asked Zafar again if the court should decide on the matter or postpone it.

At this point, the lawyer agreed to the postponement and the hearing was adjourned without a new hearing date announced for the case.