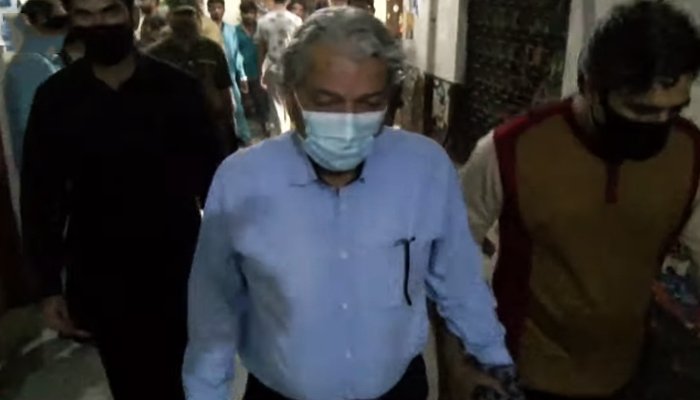 LAHORE: A local court on Monday sent PTI’s senior leader Hamid Zaman to jail on a 14-day judicial remand in a case relating to prohibited funding after it rejected the Federal Investigation Agency’s (FIA) request for an extension in the physical remand.

Zaman, who was among the founding members of the PTI, was presented before the court of Judicial Magistrate Ghulam Murtaza Virk on the expiry of his two-day physical remand.

The PTI leader was taken into what Interior Minister Rana Sanaullah Khan said was “protective custody” from Lahore on Friday.

At the outset of today’s hearing, Zaman was arraigned before the court by the FIA after the completion of his two-day physical remand.

The FIA prosecutor urged the court for a 12-day extension in the physical remand of the suspect. The magistrate remarked that funds were transferred to “Insaf Trust” from where the money was shifted to Communication Spot and M Group for political campaigns.

Zaman has been arrested on the charges of forgery, fraud, prohibited funding and assistance in crime, observed the judge.

The record shows that Zaman did not commit any fraud in the fund, the magistrate remarked, adding that it shows that neither the suspect forged the documents nor defrauded the state or the ECP through them.

In addition to this, there were no signatures of the suspect on the cheques received by the Insaf Trust or given to the marketing agencies, the magistrate remarked.

Zaman was not found involved in the case even under the testimonies recorded under Section 161, the judge wrote.

Meanwhile, the magistrate rejected the FIA’s plea and sent the PTI leader to jail till October 24.

The FIA had registered a case against Zaman, a trustee of the Insaf Trust, over prohibited party funding.

It has been reported that in 2013, Zaman was the secretary of Insaf Trust, which received $625,000 in its accounts. Moreover, the party’s welfare organisation did not meet the rules and regulations.

However, this information could not be verified by independent sources.

Zaman had contested elections from Islamabad on a PTI ticket. He is the chairman of the All Pakistan Textile Mills Association Punjab, North Zone. He is also the co-owner of a famous clothing brand.