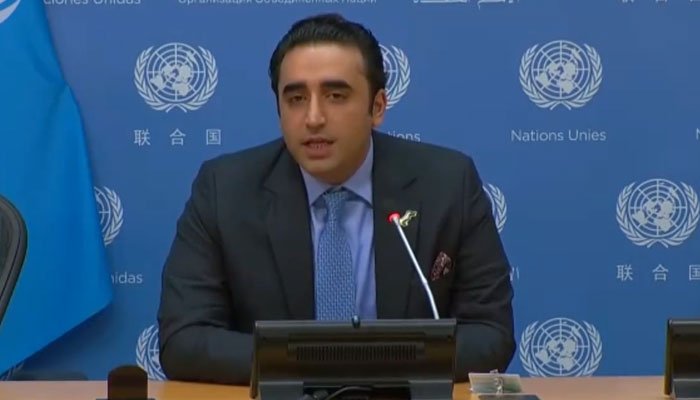 Foreign Minister Bilawal Bhutto-Zardari said Pakistan sees the flood-caused crisis as an opportunity to build back the country in a better and more climate-resilient manner. The foreign minister also highlighted what he called ‘the health emergency’ that flood victims currently face following the massive flooding.

Bilawal said this while addressing a press conference at the United Nations to brief media about Prime Minister Shehbaz Sharif’s address at the United Nation General Assembly’s 77th session. The foreign minister highlighted the flood crisis Pakistan is facing. He also shed light on the looming threat of waterborne diseases and stressed the country’s resolve to rebuild the infrastructure afresh.

“Prime Minister Shehbaz Sharif, addressing the United Nations General Assembly, passionately pleaded the case for Pakistan’s victims of the current climate catastrophe, the monster monsoon and flooding,” he said. “The PM expressed the compounding nature of the tragedy.”

Bilawal said that Pakistan faced the devastation of the flooding that has already affected 33 million people and left a third of the country under water. “This is not only a climate catastrophe but also a health catastrophe. It is a health emergency, in fact, with water-borne diseases spreading across the affected areas,” he stressed.

To cap it all, he continued, that crops on millions of acres were damaged, so Pakistan fears food insecurity. Finally, the economic difficulties that will result from this devastation, he said. The minister said a rough estimate indicates the devastation has caused Pakistan an economic loss worth $30 billion.

He said the premier called for global action and unity to confront climate change and advocated the need to address the issue of loss and damage. The PM also talked about the situation in Afghanistan and passionately expressed his desire for Pakistan to be at peace with its neighbours. He said the PM also demanded that India walk back from the unilateral and illegal action of August 5th, 2019—the attempt to undermine the internationally disputed status of the region, followed by attempts to undermine the demographic nature of the only Muslim-majority region under Indian control.

He emphasized that the Indian government’s attempt to turn the Muslim majority into a minority in their own land is illegal under international law.

In his address to the UN General Assembly, PM Shehbaz stated that the denial of the inalienable right of the Kashmiri people to self-determination is at the root of this long-running dispute. Shehbaz had said that India’s illegal and unilateral actions on August 5, 2019, to change Jammu and Kashmir’s internationally recognized “disputed” status and to change the demographic make-up of the occupied territory further harmed prospects for peace and heightened tensions in the region.

He reiterated that Pakistan is committed to supporting and helping the victims of this climate catastrophe in this initial rescue and relief phase. He said that Pakistan hopes to complete the process of its rehabilitation and reconstruction in a greener way.