Bilawal Bhutto says no time for politics, urges parties to focus on floods 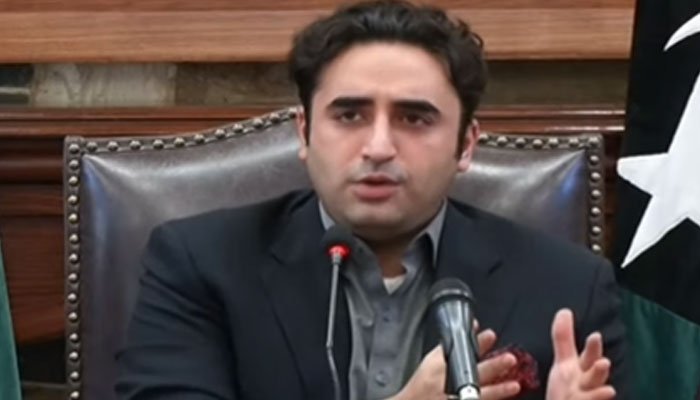 PPP Chairman Bilawal Bhutto Zardari has taken a jibe at PTI for trying to “divert” attention from floods while millions still await assistance, saying that there is no time for politics now.

Bilawal said this while addressing a press conference in Karachi on Thursday.

The foreign minister, while sharing Sindh’s updated statistics of the people affected and lands still inundated by the catastrophic floods, said that the recent flooding has caused a bigger impact on the economy than the COVID-19 pandemic did.

“Some people want to divert attention from floods towards themselves […] conspiring in a bid to form their government amid the crisis,” Bilawal said without naming anyone.

Urging a joint response to help the affectees, he said we should not be thinking about politics and votes.

“We have to unite, prioritise humanity and set the politics aside,” he added.

The PPP chairman said that the government is looking into the economic consequences of the floods as well as the food insecurity issue, while a second catastrophe, the health crisis also looms.

He said that they are currently working on the damage needs assessment which will give an estimate of the losses incurred by the floods. He said that $30 billion is an initial estimate.

Bilawal urged people to help as much as they can as the government still needs help for the rehabilitation of flood victims.

“We have faced every hardship and emerged more powerful than ever. We will do the same this time as well by the will of Allah,” he said.

Moving on to the ongoing flood relief efforts, the PPP chairman said that the government will continue to work hard for the provision of aid in terms of tents, trampolines, mosquito nets and rations.

He said that the rations provision is going well as the government bodies, NGOs, international organisations and civil societies are working together for the cause.

He went on to say that the second phase is reconstruction and rehabilitation.

Sitting alongside Sindh Chief Minister Murad Ali Shah and other ministers, the PPP chairman highlighted the efforts made by the provincial government during the natural calamity.

“While the damage needs assessment takes place, the government is making efforts to obtain financing for rehabilitation and highlighting the matter internationally.”

Criticising the nations for greenhouse gas emissions, Bilawal lamented that these rich countries have caused damage to the entire world in form of climate change while making themselves richer.

He said that the people of Pakistan are bearing the brunt of this damage and are paying in the form of their lives and livelihoods for the industrialization of other countries.

“We don’t seek alms but justice from the world,” he reiterated.