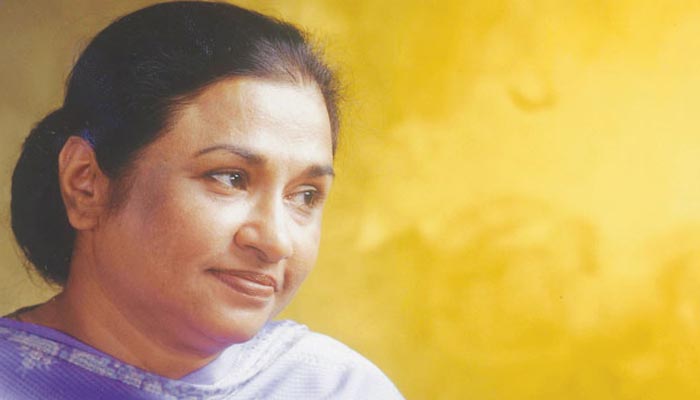 KARACHI: The Arts Council has paid a glittering tribute to renowned Pakistani singer Nayyara Noor after she passed away at the age of 71 following a brief illness in Karachi.

A ceremony was organised on Monday evening to pay homage to the famous singer dubbed as Bulbul-e-Pakistan, or the Nightingale of Pakistan.

During the ceremony, President of the Arts Council Muhammad Ahmad Shah said that “a great artist never dies and lives as long as his work lasts”.

Shah said that a very noble and humble voice will never be found in Pakistan again. “Nayyara Apa sang with all the great musicians. The Kalam of Faiz reached all over the world due to Nayyara Apa’s voice. She was a great artist; she gave whatever she could to society,” he added.

Her husband Shehryar Zaidi, a famous actor, said that she never compromised on principles and never shied away from speaking the truth.

He said that he spent 49 glorious years with Nayyara.  “Nayyara was my friend. Our music had similar tastes. I liked the songs she liked. She was a very caring woman. Some things I didn’t have in me, I learned from her, one of which was self-respect. She did not express her weakness to anyone, except Allah,” he shared.

Zaidi said that Nayyara would help people without favour and never gave importance to money.

“The Pakistan-India cricket match was incomplete for me because my mother was not with me.

“Whenever there was a recording, ammi always made sure that we had everything we needed wherever we were,” Nayyara’s son, Nad-e-Ali said.

Sultan Arshad also talked about Nayyara, saying that she was like his younger sister. “Nayyara and I used to sing together. We were together for two years. In two years there are two thousand things that will remain in my mind,” he said, while conveying his feelings for the artist.

Pakistani painter Salima Hashmi, expressing her views, said: “I can say with certainty. No one else can sing the kind of songs that Nayyara sang. Her songs live in everyone’s hearts.”

Pakistan’s veteran TV artist, Munawar Saeed, said that he was related to Nayyara for fifty years.

Praising the late singer’s many good qualities, he said: “She was such a good woman that I am sure she will be in Jannah.”

During the ceremony, Dr Karamat Ali said that one aspect of Nayyara’s character was that “she loved her people”.

“Nayyara was aware of the problems the poor faced in this country,” he said, adding: “Nayyara sang a theme song for us free of cost. I salute her.”

A showreel — based on the life of Nayyara Noor made by the Arts Council — was also shown at the event.