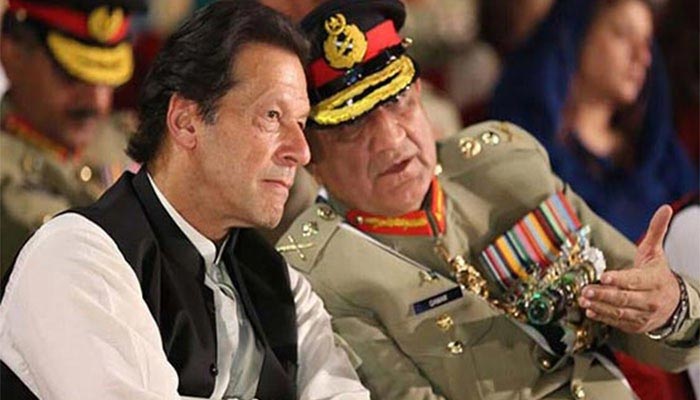 Former prime minister and PTI chief Imran Khan Monday proposed to extend the tenure of Chief of the Army Staff (COAS) General Qamar Javed Bajwa till the next elections.

In an interview with a private TV channel, Khan said that the appointment of an army chief should be deferred until the government is elected, which should then choose the new military head.

Khan has been making headlines since his ouster in April because of his constant remarks regarding the army chief.

Earlier this month, while speaking during a public rally in Faisalabad, the PTI chairman had called out the government, saying that it was delaying the elections to appoint an army chief of its own and that if a “patriotic chief of army staff comes in, he will not spare the incumbent rulers.”

However, today, — in a change of stance — the former premier said that he was ready to hold talks with the coalition government regarding snap polls.

Regarding the Islamabad High Court’s (IHC) decision to indict him in a contempt of court case on September 22, Khan said that if the five-member bench hearing the case would have allowed him to say something, he would have apologised.

The PTI chief said that he regrets if something was misinterpreted and was ready to take back what he said during his public gathering.

“I could have said what they wanted if they had allowed me to speak,” he said.

‘Do they have a solution?’

During the interview, Khan said that he had been involved in politics for the last 26 years and his party had always followed a path which aligns with the country’s Constitution.

Khan, while taking a jibe at the coalition government’s performance, said that the country will be stuck in a quagmire if the incumbent leaders’ tenure is prolonged further.

Reiterating his “foreign conspiracy” stance, the PTI chief asked: “Those who brought these people after removing our government, I want to ask […] were they thinking of Pakistan? Everyone knows the history of these two families.”

Commenting on the dynastic politics of the Sharif and Zardari families, the PTI chief said that these two families had ruled Pakistan for 32 years. “If they had a good track record and were geniuses, then it would have been a different situation but they destroyed the institutions of the country as they were involved in corruption,” he maintained.

‘Economic fallout of floods to be witnessed in winters’

Lamenting the impact of floods in Pakistan, the former prime minister said that the 2010 floods as well as the current ones have caused immense devastation, particularly in Sindh.

He said that the economic fallout of the floods will be witnessed during the winter season. “Tell me […] do they have a solution? Exports are falling, loans are rising, remittances are falling […] your capacity to give loans is shrinking.”

“Rice fields have not been cultivated due to stagnant flood water in Sindh. [The construction of] dams is a long-term solution [to curb] floods, but no big dam has been constructed in 50 years,” Khan said, adding that Sindh’s major issue is the lack of a drainage system.

“Homes are constructed on nullahs in Karachi,” he said while stressing the need for devising a proper drainage plan to deal with the issue.

“The economy is shrinking while unemployment is rising,” Khan maintained, adding that such record high inflation — which clocked in at 27.3% in August — was “never seen before in the history of Pakistan”.

The ousted prime minister hinted that the government will “further raise the electricity prices” as the International Monetary Fund (IMF) has asked the coalition government to increase power tariffs.

Talking about the state of the economy, Khan said that it was on a rapid decline, terming it as the “next challenge.”

Khan also commented on the coalition government’s deal with the IMF and criticised its performance following increasing inflation in the country.

“[They] signed the IMF programme and increased the cost of petrol and electricity,” Khan said, adding the rupee value continues to decline.

“Given where they are going, I’m afraid the government has no solution,” he remarked as he emphasised how stability in the country was only possible through elections.

He further stated that the country is already facing floods and it would be devastating if it defaults.

“I already said that no one would be able to handle the economy if political instability continued. I had warned those who possessed power,” the former premier said, adding that he also sent former finance minister Shaukat Tarin to explain the matter to the establishment.

Khan said that he warned that the economy would not be handled by conspiracies and that all credit agencies have downgraded them.

“They could not manage the economy and the stock market plunged,” he said, adding that the government increased the prices of items following IMF’s pressure.

“They had no plan, but to only have their corruption cases pardoned,” he said.

Pakistan needs $30 billion worth of external loans. “Even if we get funds from the World Bank, IMF, and Asian Development Fund we would get $8 billion,” he said, questioning where would Pakistan get the remaining funds from.

The former prime minister said that Pakistan does not have an easy option, “whichever party comes into power will have to face a mountain of problems.”

Shedding light on PTI’s strategy, Khan said that whenever his party will come back in power their first step will be to ensure political stability. “If there is no political stability there can be no economic stability,” he said, adding that the current path the country is heading towards the situation will soon get out of everyone’s hands.

Khan further added that he has received unprecedented respect in the last four months; however, “I am not rushing towards elections for personal interests.”

“All Pakistanis should be worried,” he warned. “The kind of restrictions they are imposing today were witnessed during former president Pervez Musharraf’s tenure. They tried to scare, suppress and intimidate PTI leaders and workers”.

Khan accused CEC of “sabotaging the electronic voting machine (EVM) project”, adding that the Election Commission of Pakistan (ECP) made all efforts to defeat PTI in Punjab’s July 17 polls.

“The coalition parties are scared of losing the next general elections,” he said, adding that only nations progress which takes decisions on merit.

Khan further added that the army chief’s appointment should be based on merit. “Neither Asif Ali Zardari nor Nawaz Sharif is qualified for taking this decision on merit,” he elaborated.

Berating all comments of lawyers, and political analysts, he said that no matter what they say the country is facing an “unusual situation.”

“We should now think of how to get the country out of the quagmire,” he said, reiterating that he is ready to hold talks with the incumbent government if they are willing to hold free and fair snap polls.

The PTI chief reiterated that political stability will come from elections.”

‘I am not anti-America’

He also clarified that he is not anti-America, a day after news circulated that the PTI chief has met ex-US diplomat Robin Raphel at his Bani Gala residence.

“I’ve known Robin Rafael for a long time. She is not associated with the government, but is working with a think tank,” he said.

Khan stressed good relations with the US but warned against it being used for personal interests.

“We should not be used like we were used during the War on Terror,” he remarked.

The PTI chief added that his party’s relationship with the US was not tense, but tensions arose after Khan visited Russia and Vladimir Putin attacked Ukraine.

“I didn’t know,” he stated, adding that the US was upset following its tensions with Russia.