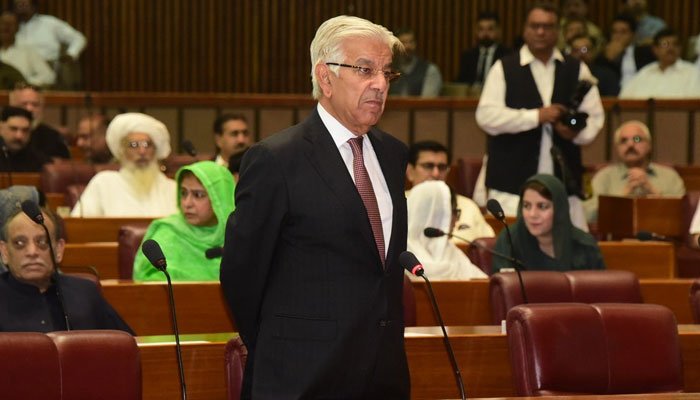 LONDON: After the recent audio leak of PTI chairman Imran Khan, Defence minister Khawaja Asif believes that Article 6 of the Constitution, which pertains to high treason, applies to the former prime minister.

To a question on the government’s plans to move against the PTI chief, the minister said that the recent audio makes it an “ideal situation” to register an Article 6 case against the former premier.

The minister, while speaking to journalists in London, said that he was the only Pakistani on whom an Article 6 case was registered on the cabinet’s order during Imran Khan’s tenure.

“You must have heard Bashir Memon’s (interview) in which he said that the case does not apply to him. But a case is liable on him, as he’s confessing everything himself,” said Asif.

“In today’s audio he’s saying do not take America’s name but at the same time is talking against it. I cannot even imagine that a political worker can be this shameful,” said the minister. He also slammed the PTI leader for underestimating the intelligence of the Pakistani people.

‘No talk of US’, Imran Khan’s says in latest audio leak

The minister was speaking to the media hours after another purported audio clip of the PTI chairman and his team has surfaced, just days after a sound bite of the former prime minister allegedly telling his then-principal secretary Azam Khan to “play” with the US cypher had come to the fore.

In it, Khan can allegedly be heard discussing the cypher with party leaders.

What was the first audio leak?

On Wednesday, a sound bite of the PTI chairman, allegedly telling Azam Khan to “play” with the US cypher, surfaced.

In the audio, a man could be heard talking about the cypher which Khan — time and again — has claimed mentions the “threat” to remove his government.

Khan allegedly told Azam in the audio — the date of which could not be ascertained — that “let’s just play” with the cypher and not mention America’s name.

In response, Azam tells Khan a scheme of how to use the cypher to forward PTI’s political agenda — and in that, he also suggests using Foreign Secretary Sohail Mahmood so the matter can be highlighted at a “bureaucratic level”.

In July, senior journalist Ansar Abbasi had warned that the audio would come forward and the PTI, in response to the blog, said that it would “not sit quietly” if such a thing happens.