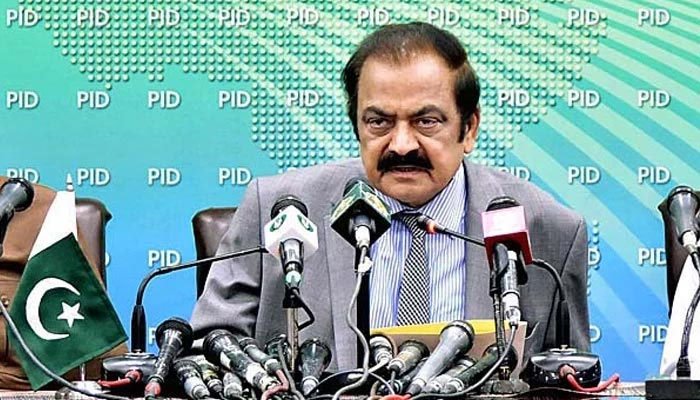 RAWALPINDI/ISLAMABAD: The Anti-Corruption Establishment (ACE) Punjab team sent to arrest Interior Minister Rana Sanaullah returned empty-handed from the Secretariat Police Station on Monday as they weren’t allowed to comply with the court’s orders.

Earlier in the day, a court while turning down the plea seeking contempt of court action against Sanaullah, ordered the provincial anti-graft watchdog officials to arrest the minister and present him before the court.

ACE Punjab Director Syed Anwar Ali Shah, while speaking to the media, alleged that the police officers misbehaved with them and pushed them out of the police station.

He said that the ACE team will now inform the court about it and plan its next strategy according to it.

The Anti-Corruption Establishment’s (ACE) plea seeking contempt of court action against Interior Minister Rana Sanaullah, for not appearing in an inquiry.

On Saturday, a special judicial magistrate issued a non-bailable arrest warrant for Sanaullah, which was considered a tit-for-tat move by the Punjab government after two PTI leaders were taken into custody by the Federal Investigation Agency (FIA).

A spokesperson of ACE Punjab said that it issued a non-bailable arrest warrant for the PML-N leader after he failed to appear in an inquiry.

During today’s hearing, the ACE court directed the team of anti-graft watchdog to continue the efforts for the minister’s arrest and present him before the court.

Whoever commits crime is a criminal: CM’s advisor

Musaddiq Abbasi, the advisor to Punjab Chief Minister Chaudhry Pervez Elahi on anti-corruption, said that Rana Sanaullah has been found guilty in the corruption case against him.

Speaking during his media talk at Punjab’s Directorate-General Public Relations, Abbasi said that the interior minister was accused of taking bribes in the form of plots and he was summoned by ACE in October.

According to the advisor, Sanaullah did not show up despite being summoned, which is why his team has the “right to arrest the criminal in any position”.

The advisor stressed that the crime should be considered, no matter who commits it.

“This is not a political case, Sanaullah’s crime has been proven,” Abbasi remarked, adding that the PML-N minister registered the plots in the case for Rs900,000.

“The housing society was inaugurated in 2017, while it received permission in 2018. Sanaullah was given two plots in the society as a bribe,” Abbasi revealed, adding that the FIR against the interior minister was registered in 2019, while he submitted his letter of acknowledgement in 2022.

“The letter of acknowledgement stated that what was written in 2018’s registry was incorrect. Rana Sanaullah wrote his property has been frozen by the Anti-Narcotics Force,” he shared, further revealing that the interior minister mentioned plans of construction on the property.