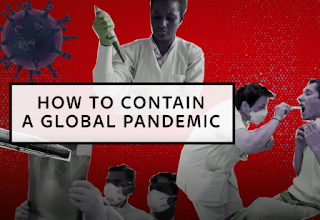 Coronavirus: 100,000 COVID-19 tests a day
would be a ‘herculean task’
Health Secretary Matt Hancock has unveiled a five-pillar
It comes as new figures from NHS England showed the first death of someone diagnosed with the virus actually happened in February – one week before previously thought.
The statistics also revealed more insight into the age profile of the patients with 52% of those who have died were aged over 80.
Meanwhile, another 569 people have died in the UK after contracting coronavirus – bringing the total number of deaths to 2,921.
Testing is seen as vital in tracking the virus and giving the UK hope of ending the current lockdown, but opposition parties and some experts expressed scepticism and called for more detail.
“I’m not saying we can’t do it, but it does seem to be quite difficult.
“I wouldn’t say it was a completely empty promise but the task is very great – the proverbial ‘herculean task’.
“As the Secretary of State said, we don’t really have a diagnostics industry in this country… and that in itself is not going to be straightforward.”
The “five-pillar” plan involves:
Mr Hancock said the 100,000 figure included both the general public and NHS staff.
And it would be a combination of antigen tests (which shows whether somebody currently has the virus) and antibody tests (which shows if someone has had COVID-19).